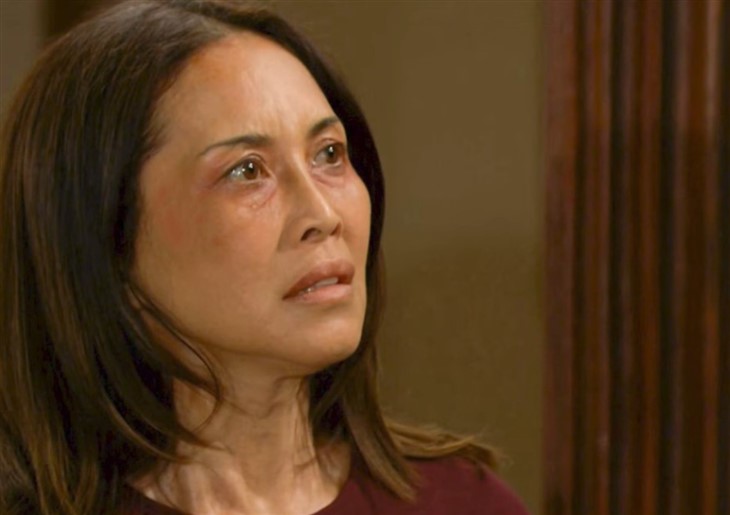 The Bold and the Beautiful spoilers document that Li Finnegan (Naomi Matsuda) accomplished her goal. John Finn Finnegan (Tanner Novlan) is out of the coma and thankfully away from Sheila Carter (Kimberlin Brown).

Li was adamant about keeping Finn alive after he arrived at the emergency ward earlier this year. One of Sheila’s two victims was taken to the hospital where Li was working, in what proved to be a great soapy scenario.

The doctors gave up on Finn, believing that he was gone. But an adoptive mother’s love prompted Li to ferret him out of the hospital, along with a bed, all needed equipment, and medicine. How she did so is as mysterious as her follow-up act, where Li escaped death after being driven off the road by Sheila.

The Bold And The Beautiful Spoilers: Is Delon De Metz Anything Like Zende Forrester?

The Bold And The Beautiful Spoilers – Why Not Treat Son At The Hospital?

Was Li being prevented from treating Finn at the hospital? Not necessarily,

Instead, Li’s subsequent comments to a then unconscious Finn, about not allowing the Forrester family to control the situation, revealed motivation. So, it was not that Li could not have cared for Finn at the hospital where she was employed, with the status of her job being unknown.

Steffy is Finn’s wife. She witnessed Sheila’s horrifying, reckless shot that missed its mark. Instead of hitting Steffy with the first bullet, Finn took it and appeared to fall dead in the alley behind Il Giardino.

Then, when Steffy used her cell phone to call for help, unfazed by Sheila’s demand, a second bullet was purposely pumped into her.

Meanwhile, back at Li’s bunker, she hunkered down. There was no stated plan about the future. While her focus on Finn was admirable, Li’s choice to go it alone was selfish and needlessly dangerous, as Sheila’s later arrival proved.

The Bold And The Beautiful Spoilers – Punishing Jack Finnegan Was Wrong

Li was naturally outraged that Jack lied to her about Finn’s maternity and paternity. Anyone, especially a longtime spouse, would have been disillusioned and wanted time and space to try and clear the mind.

The Bold and the Beautiful Spoilers: Steffy And Finn Have A Reunion That Is Too Good To Be True #bb #BoldandBeautifulhttps://t.co/arYg0n5snL

But Li should have reached out to Jack to tell him their son was alive. King’s character did not want Sheila in his life and clearly prevented him from living what would have been a far different existence if Brown’s character would have cared for him from the start.

Sheila’s comments about knowing she was not mother material when Finn was born appear disingenuous, especially considering all she has done in her life since then. But Sheila can not be blamed for Li keeping the news of Finn’s survival from Jack, whether he remains her husband or not.