The Bold And The Beautiful Spoilers: Steffy Reclaims Fantasy Life – Li Must Explain Herself 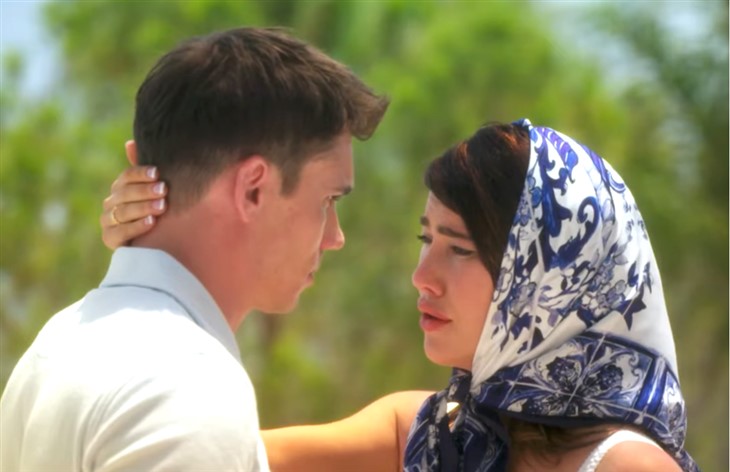 The Bold and the Beautiful spoilers document that Steffy Forrester Finnegan (Jacqueline MacInnes Wood) could not believe her ears or eyes. Was it a vision or wishful thinking?

No, John Finn Finnegan (Tanner Novlan) was calling to her in front of the church in Monaco, where she just lit a candle. But how could it be?

Steffy embraced what appeared to be her husband. Her mind doubted reality. So, she touched Finn to see if he was real. The tactile sensation confirmed that, yes, he had not died.

The Bold And The Beautiful Spoilers: Deacon In Danger Of Arrest – Sheila On the Loose

The Bold And The Beautiful Spoilers – Extraordinary Moment In Soap Time

Some scenes within some episodes rise above the fray. The images fans witnessed, the beautiful overlayed music, swirling three-hundred-sixty-degree camera shot, and initial bursts of dialogue were ideal. This tale included a climax that will be part of future retrospective reels.

Yes, Steffy and Finn were back together after the terrible ordeal that Sheila Carter (Kimberlin Brown) caused. All that Steffy feared came true, seemingly resulting in a scandalous robbery of the fantasy life she and Finn created for themselves.

No, Sheila did not end Steffy’s romantic development. Finn was not heinously killed, and the fans have not been denied continued time with the couple they quickly came to adore.

B&B Spoilers – The Origin Of This Story

Steffy and Finn’s love story began the day they met at the hospital, when Novlan’s character first entered her room. A magical visual projection accompanied what devoted soap viewers knew was a telegraph of great drama to come.

Viewers were ready to move past Steffy’s back-and-forth with Liam Spencer (Scott Clifton). He picked Hope Spencer (Annika Noelle), with Steffy being unable to move on with someone else until Finn came along.

But then, on the day of Steffy’s wedding, the improbable happened. Finn naively presented the birth mother, who introduced herself after stepping out of the shadows of the Forrester mansion guest house.

B&B Spoilers: Finn Defeats Sheila – Next Round Ahead Or Game Over? https://t.co/ELK7xpo0CD #BB #BoldTheBeautiful #Spoilers pic.twitter.com/tA2ANhfFjd

Li Finnegan (Naomi Matsuda) might be given consideration for the effects of grief she was enduring. That is the only plausible source that might be cited to explain why she would block everyone, including Finn’s wife and his father, Jack Finnegan (Ted King), from knowing that Finn survived Sheila’s gun shot.

Steffy is teased to want a clear explanation from Li. Finn will likely inject positivity and the realized great outcome when that happens. He, like the rest, will want to enjoy the restoration of the Finnegan’s great life rather than focus on his hopefully caught birth mother.