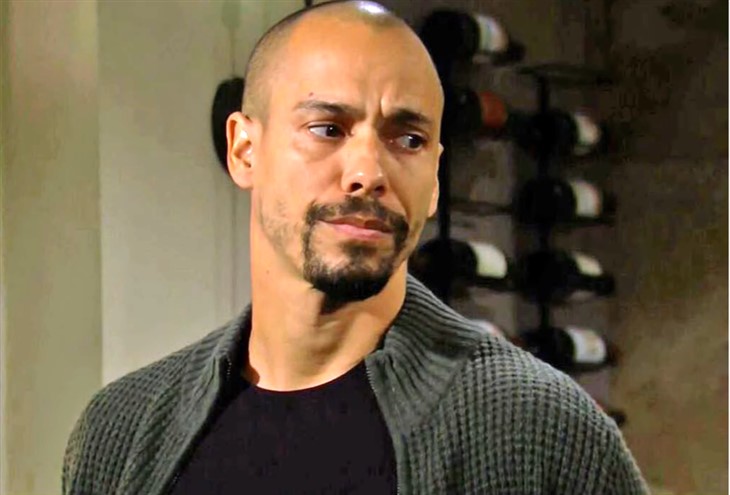 The Young and the Restless spoilers document that Devon Hamilton (Bryton James) is upset with his cousin. This is not the first time Devon’s feelings about Nate Hastings (Sean Dominic) have been passionately expressed.

Is Devon reacting to Nate’s business decisions, or is he still harboring resentment for what Dominic’s character did with Elena Dawson (Brytni Sarpy)? A larger question involves whether Elena’s decision to reveal her connection with Nate left Devon feeling abused and powerless?

The ongoing health issues that Amanda Sinclair’s (Mishael Morgan) mother is experiencing has kept her out of the loop until recently. Devon could use her wise counsel in hopes of avoiding a recurrence of trouble with Nate.

The Young And The Restless Spoilers – Amanda Sinclair Is New Soul Mate?

It would be hard to argue that Devon does not love Amanda. He has demonstrated that she is not a replacement for her late identical twin sister.

There was never any competition between the sisters because they did not know about each other’s existence. Plus, Devon was with Hilary Hamilton (Morgan) before he fell in love with Elena and was with Sarpy’s character before Amanda came to town.

If Elena truly loved Devon, she may never have allowed herself to become emotionally involved with Nate.

If Elena and Nate got carried away at the New Hope Clinic, in a way that did not involve their deeper feelings being confirmed, she may not have had to reveal that event. Doing so was Elena’s way of forcing an end to her relationship with Devon.

She realized that Nate was her future and Devon was a nice guy. While they had a connection, they were not firmly committed through marriage and had no children.

The Young And The Restless Spoilers – Devon Hamilton’s Future Plans

Intriguingly, viewers can rightly claim that Elena has not yet married Nate and has not had his child yet. But a fair counter would include a comparison time frame, with Elena and Devon’s togetherness existing for a significantly longer period of soap time.

The Young and the Restless Spoilers: Did Victor Kill Ashland Locke? #yr #youngandrestlesshttps://t.co/KiTVX5Kdcr

Devon’s plans are to put Nate in his place at Chancellor-Winters. He is not Devon’s co-head. That person is Lily Winters (Christel Khalil).

In terms of romance, Nate and Elena appear solid, as do Devon and Amanda. So, the crux of the problem that Devon has with Nate stems from an old grudge, which will not be solved with logic anytime soon.