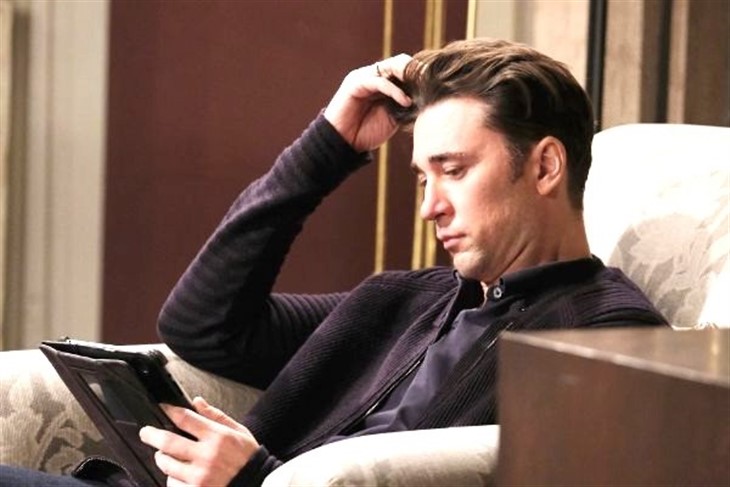 Days of Our Lives spoilers indicate that Chad Dimera (Billy Flynn) is getting very close to losing it since his wife, Abby Dimera (Marci Miller) was murdered. Chad is taking his rage out on his children and he needs to be stopped. Will Jennifer Deveraux (Cady McClain) be forced to take Abby’s children for their safety?

Days Of Our Lives Spoilers – Chad Dimera Is Frustrated

Days Of Our Lives spoilers reveal that Chad is frustrated with the system as he is having to work through his grief. No one has been arrested for his wife’s murder and Chad is beside himself. Chad misses his wife so badly and can hear her voice although the house. Chad had to get out of the Dimera mansion no matter what.

Unfortunately, a change of scenery did not help as Chad took the children to the Horton house. Chad wanted his children to visit the aquarium with their grandmother. However, Chad’s son Thomas Dimera (Cary Christopher) wanted no part in going because his mother wasn’t taking him. Thomas began to demand that his mother come home and Chad tried to convince him that couldn’t happen.

Chad has become so angry that his attitude is turning rageful. Chad has literally been screaming in his son’s face trying to get him to listen to reason. Eventually, Thomas gets upset and throws his tablet, and races off. Chad screams after him until Thomas is out of site before sitting and looking at Abby’s photo. Abby would not want her children to be treated this way.

Chad needs to get his emotions under control. Jack Deveraux (Matthew Ashford) and Jennifer may offer to take Thomas and his sister Charlotte Dimera (Olivia and Oakley Rondou) to Boston with them for a while. Abby would never want her husband to behave this way with her children. Will Chad agree to separate from the children until he can get things together in his head?

Days Of Our Lives Spoilers – Jennifer Horton Insists On Helping

Chad may not want to be separated from his children but he is not acting right toward them. No matter how frustrated Chad is, he cannot take that out on the children. Jennifer may step in and insist on taking the children for a while.

Will Chad agree to take some time to get himself together? Will Jennifer have to fight Chad to do what is right? Chad cannot help the children until he helps himself. Will Chad finally get the help he needs?

Jennifer isn’t trying to take Chad’s children. However, Jennifer does not want the children’s psyche damaged either. Can Jack and Jennifer help Chad to get things back on track? Keep checking back for Days of Our Lives news, spoilers, and updates.