The Bold And The Beautiful Spoilers: Is Sheila Gone? – Finnegan’s Need Resolution 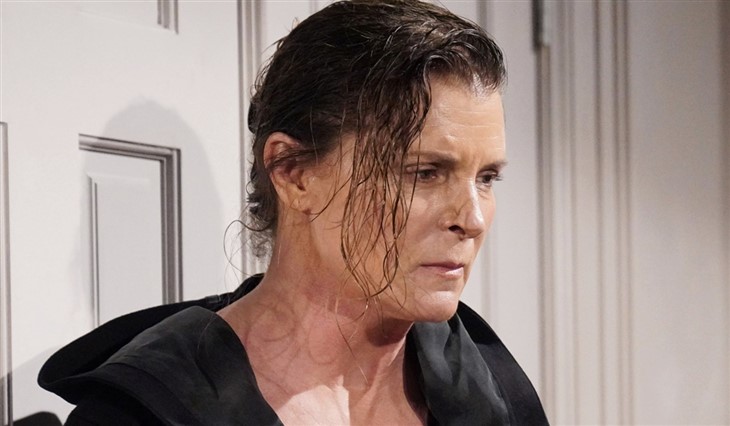 The Bold and the Beautiful spoilers document that Sheila Carter (Kimberlin Brown) was last seen in Deacon Sharpe’s (Sean Kanan) apartment. He left in a huff, upset that Sheila had used him for months and jeopardized his parole by making contact while she was a fugitive.

It is challenging to predict what Sheila’s immediate future will be. Brown may have had her farewell scene with Tanner Novlan (John Finn Finnegan) and Kanan.

But it does not feel like viewers have witnessed the final climax in Sheila’s latest reign of terror on B&B.

The Bold And The Beautiful Spoilers – What Did Sheila Carter Expect?

The subject header is a fair question. What did she expect while standing in the shadows at the Forrester mansion’s guest house?

How did Sheila get into the building? Presumably, she planned to wait and scope out an opportunity to see Finn on her own.

But Sheila had to assume that she would not keep her identity a secret. Even if Finn did not introduce her to the family he married into on that fateful day, he would have provided details about Sheila’s description. So, it appears she wanted contact with the Forrester family via Finn.

The reunion episodes in Monaco exceeded expectations. Solid congrats to TPTB on all accounts, and kudos to Novlan and Jacqueline MacInnes Wood (Steffy Forrester Finnegan) most especially.

Now, with the magical reunion completed in that memorably gorgeous location shoot setting, Finn and Steffy want to head home. But will they find Sheila lurking?

It is plausible to believe that a bonus showdown with Sheila is coming. Steffy needs to face her shooter and tell her off. Then, Wood and Novlan’s characters need to orchestrate her capture. If any pairing can do it, these good souls can.

Sheila has avoided capture and re-imprisonment to date. She is also brash enough to tempt soapy fate and make additional contact.

Brown’s character has not had a chance to offer a formal apology to her daughter-in-law. Possibly, in Sheila’s optimistically warped mind, she thinks doing so would promote forgiveness.

Steffy would never be open to anything other than Sheila’s lifetime imprisonment sentence. Hard labor in isolation would be a preferred outcome.

So, fans will await word of Sheila’s capture or more likely, her reappearance on B&B.