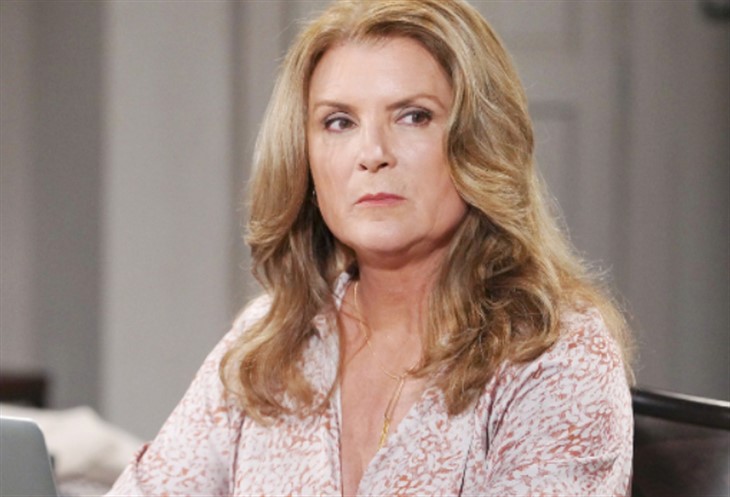 The Young and the Restless spoilers document that Sheila Carter’s (Kimberlin Brown) west coast victims, of which there are many, now believe she is dead. But the lack of her body, except for one digit, implies that one of the great villains in soap opera history was not killed in a bear attack.

Soap fans know that retrospectives can be presented during story line transitions. Seeing the characters gathered at Forrester Creations executive suite, with a variety of Sheila’s memorable moments were included, suggested Brown’s latest contracted time on B&B had come to an end.

But daytime devotees know that Sheila debuted on sister soap, The Young and the Restless, in 1990. She famously crossed over to B&B in 1992 and became Eric Forrester’s (John McCook) wife by 1993.

Sheila’s final days on Y&R came in two stints during the mid-2000s, which was fittingly weird for this particular character. Brown’s final appearance came in 2006. But the audience later learned Sheila was not done.

A bizarre choice was made, with Michelle Stafford (Phyllis Summers) being tapped to perform in a dual role. She became Sheila though the woman who was said to be that character apparently having facial surgery.

However, Sheila’s (with Brown playing the role) return to Los Angeles, California, in 2017 began with her being questioned about the supposed GC death. Sheila claimed to know nothing about her demise or the circumstances surrounding it.

Stafford’s referenced version of Sheila was after her original nemesis, Lauren Fenmore Baldwin (Tracey Bregman), at that point in the plot. What seemed to be a final conflict occurred with Stafford portraying herself and Sheila through visual tricks.

Lauren decided who the real Phyllis was during a confrontational conversation with the supposed Sheila and shot her dead. That appeared to be the end of Sheila on Y&R until Brown reappeared in LA in 2017.

Sheila did create dissension with Quinn Fuller (Rena Sofer) during that period on B&B. But Brown’s character did not invoke her darkest side until the latest comeback that began in 2021.

The character Brown was playing on B&B had to be Sheila based on the internal talk she had with herself when no one was around. That is proof that Stafford’s secondary character was not Sheila.

So, Sheila could return to GC as a perceived place of refuge. Lauren was apparently never contacted by Eric during Sheila’s two appearances (2017-2018 and 2021-22). But he might contact her now, with fans of both shows knowing Bregman crossed over and back to B&B herself, which enables Sheila’s return to Y&R as plausible.

Whether Sheila escaped the bear attack or faked a bear attack would hopefully be answered. In any regard, Brown’s character might walk with a slight gate back to Wisconsin as she is supposedly missing one of her middle toes.