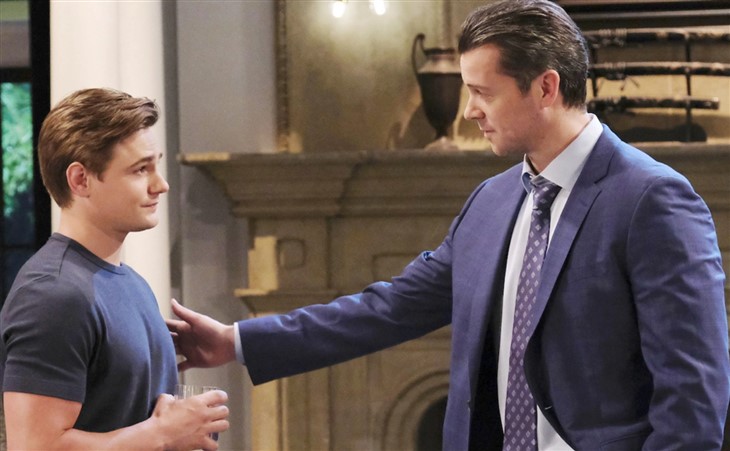 Days of our Lives (DOOL) spoilers and updates tease Ava Vitali DiMera (Tamara Braun) is in the line of fire. Ava had been in a relationship with Jake DiMera (Brandon Barash). Ava had hoped to be able to have a future with Jake but he was killed by an armed robber. Ava was approached by Gabi Hernandez (Camila Banus) who wanted Ava claim to be Jake’s widow in order for Ava to get Jake’s shares in DiMera Enterprises.

Gabi is the CEO of DiMera Enterprises and did not want EJ DiMera (Daniel Feuerriegel) to get the chance to take away her position. Ava has agreed to help Gabi with her plan. EJ invited Ava to move into the DiMera estate to keep watch on her. Ava has had a chance to meet EJ’s son Johnny DiMera (Carson Boatman).

Ava had been surprised by EJ’s invitation. Ava decided that she would take EJ up on his offer to move into the DiMera estate. Ava had a revealing and spicy first encounter with Johnny. Ava told Johnny that she was going to be living at the DiMera estate. Johnny decided to give Ava a warm welcome. Johnny had a confrontation with his sister Allie Horton (Lindsay Arnold). Allie was upset with Johnny because he wanted to find a way to take Chanel Dupree (Raven Bowens) away from her.

Ava interrupted the confrontation and told Allie that she needed to leave Johnny alone. Ava pointed out to Allie that she had been in a relationship with her son Dr. Tripp Johnson (Lucas Adams) and had broken his heart. Allie decided that she would leave Johnny alone. Johnny was impressed that Ava had taken his side with Allie. Johnny has found that himself thinking about his first encounter with Ava.

Ava knows that EJ is does not trust her. EJ does not believe that Ava is really Jake’s widow. Ava is working to get EJ to believe that she did marry Jake before his death. Ava is determined to help Gabi because Gabi is going give Ava a prominent position at DiMera Enterprises. Ava is trying to keep her secret but EJ has found out that Ava is keeping another secret. EJ interrupted Ava and Gwen Rizczech (Emily O’Brien) having a conversation.

Ava knows that Gwen may have killed Abigail Deveraux DiMera (Marci Miller). Gwen had been in jail and had Ava helped her to get out of jail on the night that Abigail was killed. Ava does not want to get into trouble with the law for helping Gwen. Ava told EJ that she was trying to help Gwen get back with her ex-fiancé Xander Cook (Paul Telfer). EJ does not believe that Ava is helping Gwen get Xander back. EJ is determined to find out the secret that Ava and Gwen are keeping.

Days of our Lives Ava knows that she may get into trouble because of her secrets and lies. Ava knows that EJ does not want her to be able to hold onto Jake’s shares. Will EJ find out that Ava’s marriage to Jake was not real?

Ava does not want EJ to find out that she helped Gwen on the night that Abigail was killed. Will Ava be able to keep EJ from finding out the secret that she and Gwen are keeping about Abigail’s death? Ava found that she liked Johnny. Ava does not know that Johnny may be interested in her. Will Ava find out that Johnny may want to get into a relationship with her? Be sure to catch up on everything happening with DOOL right now. Come back here often for Days of Our Lives spoilers, news, and updates.