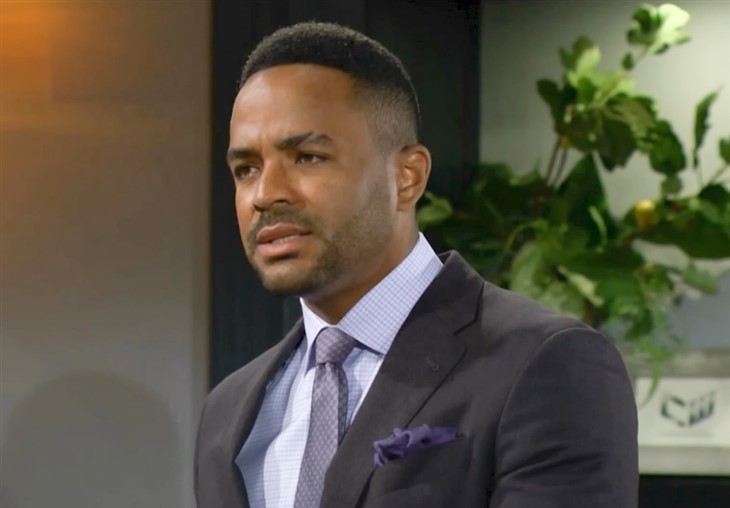 The Young and the Restless spoilers document that Devon Hamilton (Bryton James) is right to think that Nate Hastings (Sean Dominic) crossed another business line. Nate’s decision, in offering Sally Spectra (Courtney Hope) a payoff amount to release Elena Dawson (Brytni Sarpy) from her Newman Media contract, was not preapproved.

Devon increasingly realizes that his cousin is aggressive. What happened when Elena decided to end her relationship with Devon and move onto Nate established a precedent.

Nate will do what he wants until or if Devon can stop him. That telegraphs ongoing, needless trouble at Chancellor-Winters.

The Young And The Restless Spoilers – Devon Hamilton Was Partially Committed

Devon was committed to Elena to a certain degree. It appeared as though he took her commitment to him for granted. Why else would Devon be blindsided by her self-revealed romantic connection to Nate?

Elena was the woman who helped him recover after the unborn child he and Hilary Hamilton (Mishael Morgan) were expecting died. Then, Hilary died days after the horrific car accident that Lily Ashby (her last name at that point in the plot, Christel Khalil) unintentionally caused.

But the bond Devon and Elena shared proved to be unsustainable, with her head being turned by Nate before she and Devon were able to marry.

Naya Benedict (Ptosha Storey) is in bad condition. She is not expected to live, barring a miracle. So, Devon encouraged Amanda Sinclair (Morgan) to be with her mother in Virginia.

The above temporarily wrote Amanda out of the picture at the exact moment when renewed tensions escalated between Devon and Nate. That is no soapy coincidence, as all soap fans recognize.

Amanda has helped Devon center himself after he and Elena broke their relationship. Amanda also projects as Devon’s better match, likely next wife and mother of his next child.

The Young and the Restless Spoilers: This Is The Reason Why Phyllis Can’t Stand Diane #yr #YoungandRestlesshttps://t.co/anq05sCHf0

The Young And The Restless Spoilers – Nate Hastings Has A Problem

Nate has a problem when it comes to his view of Devon. James’ character is more than just his cousin. Devon is his authority figure at Chancellor-Winters.

Lily is in a tough position as the co-head of the newly merged company. She wants it to be a family business but does not need strife through exacerbated petty personal conflicts.

As is true of all good soap, Elena’s potential addition to the Chancellor-Winters mix will likely increase opportunities for tension on Y&R.