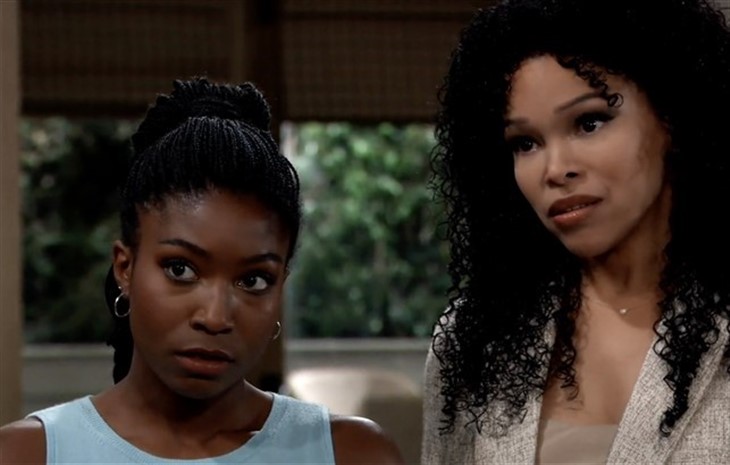 General Hospital spoilers reveal that Tabyanan and Brooke opened up about several storylines including Spencer Cassadine’s (Nicholas Chavez) sacrifice and the potential that Oz Haggerty (Max Faugno) pointing the finger at Esme. Obviously, Portia is putting her career at risk, unbeknown to Trina. However, Portia could be in a lot of trouble, especially if Oz doesn’t survive.

Trina also has two very handsome men vying for her affection. Spencer and of course, Rory Cabrera (Michael Kruse). Trina is quite impressed with Rory and the attention he has given her. However, Spencer has risked his freedom for Trina as well. However, the #Sprina fanbase is pushing for their couple strongly on social media. Which man will Trina choose in the end?

Brook talked about Portia and her relationship with Curtis Ashford (Donnell Turner). Of course, loyal viewers are still waiting for confirmation about Trina’s parentage since several are convinced that Curtis, not Marcus Taggert (Real Andrews) is her father. Portia and Stella Henry’s (Vernee Watson) scenes were highlighted as well, especially touching on racial injustice being a factor in this case.

Tabyana touched on what it was like taking over as Trina when Sydney Mikayla left the role. Of course, Tabyana gets to work with greats like Maura West (Ava Jerome) and Carolyn Hennesy (Diane Miller) as well. Of course, Scott Baldwin (Kin Shriner) started as Trina’s lawyer before he was called away to save his daughter from an emergency.

Brooke admits to asking Tabyana beforehand about touching her during scenes. Of course, a mother would want to touch her daughter’s shoulder, offer her a hug, or just a touch of encouragement. Tabyana and Brooke have things that work for them and it comes across as a genuine mother/daughter relationship onscreen.

Brooke also has hopes for Portia and Curtis. Brooke says she would like to have a little Portia baby in their future. Michael also touched on explosive secrets and fans know there could be at least two. Curtis has no idea that he is still married to Jordan Ashford (Tanisha Harper) or that Trina may be his daughter after all.

The chances of an uneventful wedding between Portia and Curtis are slim to none. However, it should be interesting, to say the least.