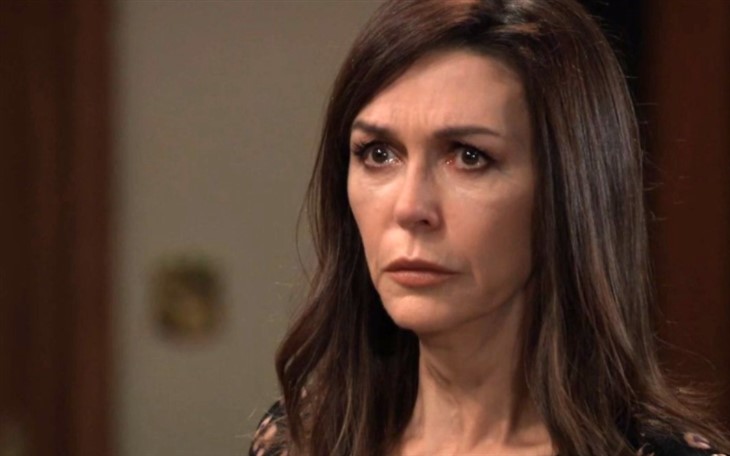 General Hospital spoilers and updates tease that Anna Devane (Finola Hughes) and Lucy Coe (Lynn Herring) will plot together to expose the truth about Valentin Cassadine (James Patrick Stuart). They’ve already agreed to work together although the first time Lucy couldn’t get anything out of Martin Grey (Michael E.Knight) after Anna threatened to expose him to his three ex-wives.

General Hospital Spoilers – Lucy Coe Is In A Tight Spot

Martin’s not the only one in a tight spot if he spills the tea about what he might know about Valentin’s activities. Anna is trying to find out where Valentin has really been and what he really was doing when he wasn’t recuperating from a severe infection after having been kidnapped. Valentin is Martin’s client and he would violate attorney-client privilege should he tell anything, while Lucy is in a spot because of Valentin’s investments in Deception Cosmetics.

Anna doesn’t know that Valentin is being blackmailed by Victor Cassadine (Charles Shaughnessy) who put Charlotte Cassadine (Amelie McLain) in a foreign boarding school and not letting Valentin have contact. Valentin would be much better off just to tell her the truth and ask for her help taking his father down.

Lucy and Anna know there must be a way to find out what’s really going on with the Cassadine besides blackmailing Martin, who may not know anything anyway. Martin handles Valentin’s business contracts, not his personal life although he was the one who indirectly saved his sister’s life. He knew Laura Collins (Genie Francis) was planning to have Victor deported for moral turpitude and told Valentin about it. He wouldn’t have told Valentin that if he knew he was under Victor’s control, but it did allow Valentin to create a diversion so Laura wasn’t shot by Victor’s sniper. Valentin himself had been tasked with taking Laura out but he backed out of it.

Anna and Lucy know that where there’s a will, there’s a way, and they will find a way to get the truth about Valentin’s excuses. And Anna does feel that Valentin’s reasons for breaking dates with her have been excuses, and she’s fairly sure that he’s told her more than one lie. True, Anna did learn a difficult lesson in trust when she let her heart deceive her about her nephew who she once thought was her son, Peter August (Wes Ramsey).

Anna wants to trust Valentin but she doesn’t want to make the mistakes she made with trusting Peter, even though Valentin helped her see who he really was. He was fooled for many years because of his guilt in handing him over to his father; Anna does consider that perhaps he’s being fooled by Victor.

Anna and Lucy know that they have to plan their work and work their plan; they decide to have Lucy do the main work with Anna supplying the rest . Valentin won’t suspect Lucy like he would Anna, because he doesn’t know her as well – it would be a simple matter for Lucy to get clumsy. She could spill something on his suit coat and take it to the cleaners, only in the process Anna will arrange to have a tracking device sewn in it. She just has to make sure it’s under a button so he won’t feel or notice it and she’ll be able to track his movements and record his conversations. Then she’ll know everything and be able to decide how to proceed from there.