Days Of Our Lives Spoilers: Li Pulls The Plug On Stefan, Rolf Explodes 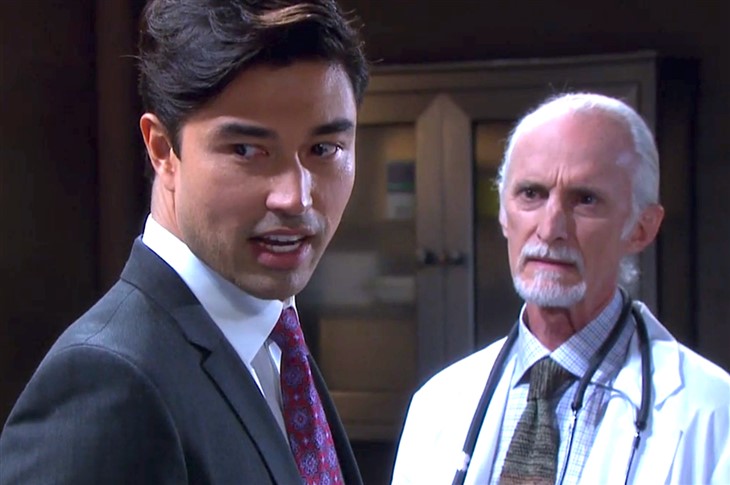 Days Of Our Lives Spoilers – A Close Call

It was a close call when Li sneaked into the secret laboratory where Rolf had recently transplanted Jake DiMera’s (Brandon Barash) heart into his twin and shut off Stefan’s life support. Fortunately, Kristen DiMera (Stacy Haiduk) happened by and plugged the machines back in and got his heart going again. Kristen had a few choice words of her own for Li when she caught him trying to kill, or re-kill as the case may be, her little brother.

Li of course denied he did anything but he was caught like a rat in a trap and Kristen is likely the one who busts him to Rolf. To say Rolf, who was Stefano’s loyal henchman and physician for many years is upset will be the understatement of the century.

Stefan has been “dead” but kept alive by machinery for several years, with an electronic device serving as a heart since his was donated to Julie Williams (Susan Seaforth Hayes). During the time Rolf was incarcerated, the resurrection project was put on hold but Stefan’s organs and body were kept alive by the electronic heart.

Li has recently been a little upset and noted displeasure regarding Stefan’s widow, Gabi Hernandez (Camila Banus) continuing to wear his wedding ring on a chain. When Li confronted Gabi about it, she told him that even though she had been with other men since Stefan, she always felt married to him. Knowing Rolf was ready to raise Stefan soon Li must have felt compelled to eliminate his competition.

Kristen determined right then and there when she got Stefan going again after plugging his life support back in that Rolf needed to bring him fully to life right away. She couldn’t chance Shin coming in and again trying to thwart the process of the youngest son of The Phoenix being resurrected. Shin knows if Stefan is in play once again that he will lose Gabi to him and made a deal with Kristen to reunite Stefan with Chloe Lane (Nadia Bjorlin).

Kristen agreed but when she brings Rolf into the room and tells him Li pulled the plug, Rolf goes ballistic. Rolf shouts at Li that he is trying to kill Stefano’s son and he can’t allow it.