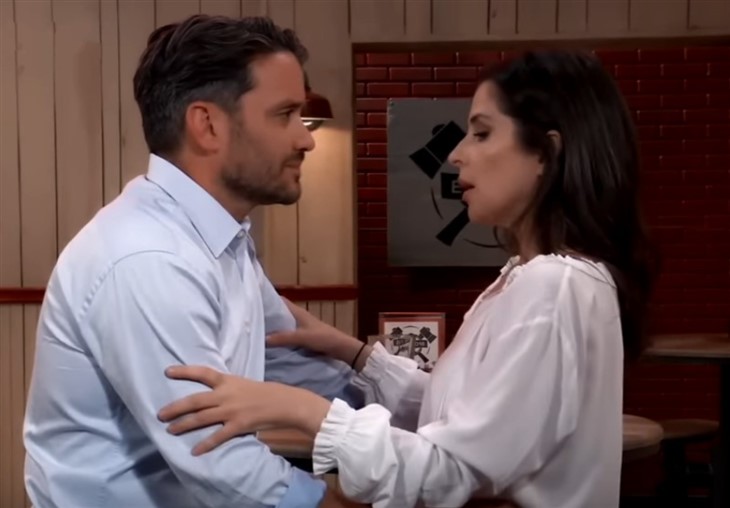 General Hospital spoilers suggest that Dante Falconeri (Dominic Zamprogna) may need to step up his game if he wants to hold on to Sam McCall (Kelly Monaco). Dante fears that he may lose Sam after suddenly asking her to move in with him. Sam is very unsure about this idea and certainly doesn’t want to move into Lulu Spencer’s (ex-Emme Rylan) house.

General Hospital Spoilers – Can This Relationship Be Saved

General Hospital spoilers reveal that during the week of August 15 through 19, Dante may be convinced that he has lost Sam. Sam has reservations because of Lulu but that doesn’t seem to be the only thing bothering her. After all, Sam certainly had her eye on Carly Corinthos (Laura Wright) and Drew Cain (Cameron Mathison) while they were talking the other day.

Sam chose not to be with Drew because of her feeling for Jason Morgan (ex-Steve Burton). However, their relationship didn’t last because Sam broke things off with him. Sam went to prison for killing Shiloh Archer (ex-Coby Ryan McLaughlin) and was later released on parole. However, Sam was not allowed around Jason at the time. sam seems to have waffled a lot since ending things with Jason who is now presumed dead.

It seems that Olivia Falconeri (Lisa LoCicero) could have a conversation with Sam about Drew and Carly. Unfortunately, Sam’s reaction could cause Dante to make a move that pushes her further away from him. Should Dante take a step back before this blows up in his face? Will Sam choose Dante in the end?

Could Sam decide she and Dante need to slow down instead of moving in together? Could Olivia talk to Sam to see where she stands with Drew and Dante? After all, Olivia doesn’t want to see her son hurt and if Sam isn’t ready to commit, it may be time to take a step back.

Sam has already freaked out when she thought Dante was about to propose. However, Dante may feel the need to do just that to prove that he wants to be with Sam. Sam has been married twice for love and both have ended in divorce. Sam may not be willing to put her children through that. Sam may also resent Dante for putting her in that position as well.

Will Dante be forced to back off and wait for the woman he loves? Should Sam and Dante focus on finding a new home together and not live in one either of them has shared with someone else? Dante and Sam may have to give a little to make this relationship work. However, someone has to make the first move. Can they come up with a compromise or is this the end of Sam and Dante’s romance?