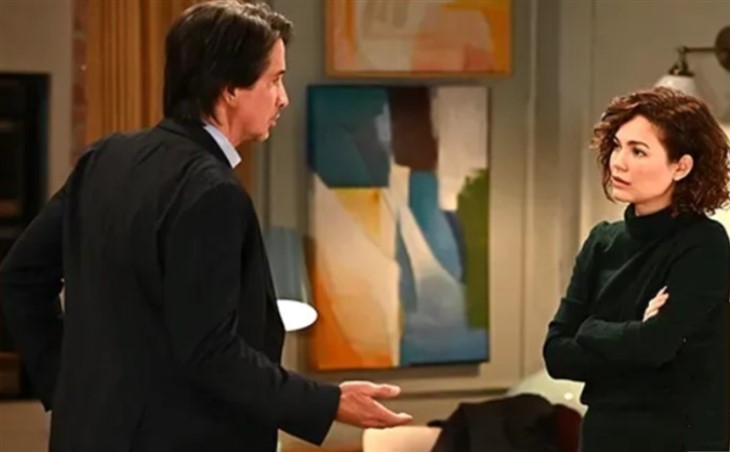 General Hospital spoilers and updates tease that Hamilton Finn (Michael Easton) will make a confession to Elizabeth Baldwin (Rebecca Herbst) and she’ll be beyond frustrated. Even though she warned him not to contact her parents, she didn’t mention her sister, Dr. Sarah Webber (most recently Sarah Laine) and he did call her.

Finn has had a penchant for overstepping out of concern; part of that is due to his not being able to save his wife, Reiko (uncast character) from Blackwood’s Syndrome. He admitted to his father, Gregory Chase (Gregory Harrison) that he’d never forgiven himself for that. He also admitted that Elizabeth had forbad him to contact her family, in particular her parents when she started having symptoms of post-traumatic stress disorder.

But Finn is far too worried about Elizabeth to not overstep out of concern, and he told his father he couldn’t just ignore what was going on. He was intent on talking to someone who might know what happened to her even if she hated him for it.

It’s obvious to Finn that something happened to Elizabeth, and he fears it may have been when she was a young child. But her last flashback, when he found her on the stairs with a bunch of dropped patient files, revealed she must have been a young teenager. Her flashback revealed a struggle with a woman whom she grabbed by the arm and warned to stay away from her father. Elizabeth was already upset with Finn for talking about her past with her childhood friend Terry Randolph (Cassandra James) and apparently she never told Terry about the incident. It was obvious, however that Terry, too, was worried about her friend and mentioned perhaps she left Shadybrook, where she’d checked herself out of, too soon.

Finn, after calling Sarah, admits to Elizabeth that he called her sister to see if she knew about any incidents in their past that could be triggering Elizabeth. The two sisters had not gotten along when they first came to Port Charles, and at one time were rivals over Lucky Spencer (Jonathan Jackson). Sarah had returned to Europe to live with their parents for a while, later coming back as a doctor while “Lizzie” stayed with Audrey Hardy (Rachel Ames).

Elizabeth doesn’t like Finn talking to her sister any more than her parents, and she is frustrated and angry. But apparently their argument triggers more memories, as later she has another dramatic flashback.