The Bold And The Beautiful Spoilers: Brooke Will Not Relent – Taylor Gains More Steam 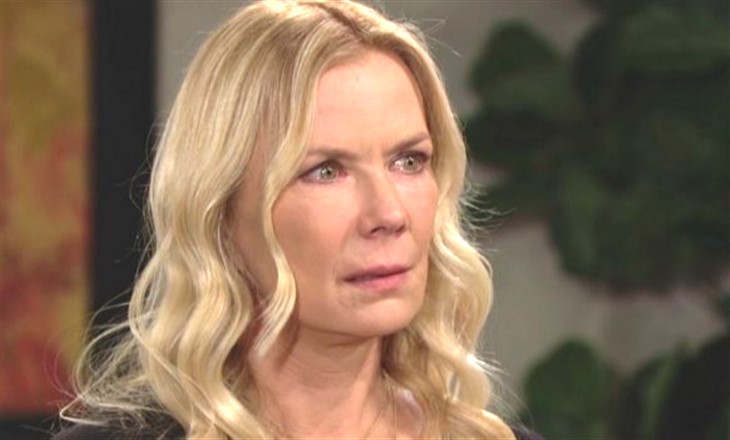 The Bold and the Beautiful spoilers document that Brooke Logan Forrester (Katherine Kelly Lang) is hot under her fashionable collar. She believes it is wrong for her grandson to leave the cabin and recognizes that Douglas Forrester’s (Django Ferri) move also allows Taylor Hayes (Krista Allen) to gain steam.

The use of the word steam is not a reference to the mashed nickname that represented the one-time couple, Steffy Forrester (Jacqueline MacInnes Wood) and Liam Spencer (Scott Clifton). But there does appear to be a deepening crack in the bridge, which is a hard wink at Brooke’s fraying marital ties to Ridge Forrester (Thorsten Kaye) that Thomas Forrester’s (Matthew Atkinson) recent change sparked.

Douglas did well with Hope Spencer (Annika Noelle) and Liam within the last handful of years. Fans know that the period Douglas spent in the cabin was less than that. But TPTB SORAS’d (soap opera rapid aging syndrome) the character that was formerly played by Henry David Samiri (Douglas).

So, with Douglas getting older, Thomas sensed his son’s increased need to be with him. Ferri’s edition of Douglas is teased to agree.

Thomas’ move to the Forrester homestead, meaning Eric Forrester’s (John McCook) mansion, with Douglas has upset Hope, and caused Brooke to believe she must weigh in.

Brooke has long believed that she should multitask. Rather than simply focus on any of her many marriages to Ridge, including the ones where he looked like Ronn Moss (who portrayed the original Ridge from 1987 through 2012), Brooke has often had a lot to say about the lives of her immediate family and extended family members, friends, enemies, and others in this supersized version of Los Angeles, California.

Ridge recently decided to move from the cliff house, where he had been living after leaving the Logan mansion, to Brooke’s home. That choice implied the conflict between Brooke and Taylor was over, with Lang’s character retaining her rights to Ridge.

But the Monaco kiss happened and has been followed by Brooke and Ridge siding with each of their children in the developing Douglas matter.

The Bold And The Beautiful Spoilers – Taylor Hayes Is Team Forrester

Brooke has often been accused, or based on opinion, proven to be on Team Logan. That is certainly not true of Taylor, who backs Team Forrester.

Taylor was resigned to believing that Ridge chose Brooke over her. The length of time that passed since Taylor and Ridge were married also indicated that the destiny tag Brooke applies to her enduring connection with Kaye’s character was unbreakable.

But a confluence of daytime events, including a possible Douglas custody battle, or at the very least, contentious disagreement, gives Taylor renewed hope and current momentum on B&B.