The Young And The Restless Spoilers: Allie’s Mom Arrives In GC? Major Shakeup And Bombshell 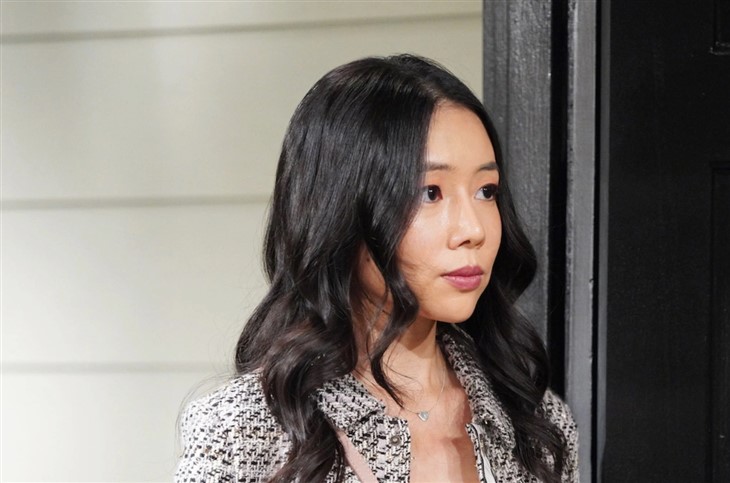 The Young and the Restless spoilers reveal that not much is known about Allie Nguyen’s (Kelsey Wang) mother. Allie mentioned she is estranged from her mother but didn’t say why. Allie’s mother did come to L.A. after Keemo Abbott’s (formerly Philip Moon) death but didn’t stay long as she had to get back to work. So, could we soon find out the deal with Allie’s mother?

The Young And The Restless Spoilers – Allie Nguyen’s Grief

Y&R spoilers reveal that Allie struggled when her father suddenly died. Keemo was reportedly healthy and was still relatively young. So, Allie was coping with her father’s death as well as never expecting him to die when he did.

Y&R Spoilers – Why The Estrangement?

Allie hasn’t gone into detail about her mother. What is her name and what kind of work does she do? Where does she live and why isn’t she close with Allie? For a mother and daughter to have such distance, something big must have happened between them.

In fact, shouldn’t a mother be concerned about Allie finding new family members and going to live with them? Wasn’t Allie’s mother just a tad concerned? Apparently not, which means either Allie’s mother really doesn’t care or doesn’t exist.

The Young And The Restless Spoilers – Life Is Going Too Smooth

The Young and the Restless spoilers reveal that things are going well for Allie in Genoa City. Allie lives in the Abbott manse and has been accepted by her extended family. Allie has especially gotten close to Jack Abbott (Peter Bergman). Allie seems to get along well with Traci Abbott (Beth Maitland) and Summer Newman-Abbott (Allison Lanier).

While there is tension between Allie and Ashley Abbott (Eileen Davidson), it’s not a feud or anything that really complicates anything.

Allie has a new romance with Noah Newman (Rory Gibson). Plus, Allie is excited about starting her internship at Jabot. Life is good for Allie right now and that’s usually a sign everything is about to blow up.

The Young and the Restless POLL: Is Billy Making A Huge Mistake With Chelsea? #yr #youngandrestlesshttps://t.co/NUAfJ33EGR

Could Allie’s mother suddenly arrive in Genoa City? It certainly is a possibility, especially with Allie’s past being such a mystery. There was that scene featuring Allie telling Ashley that she isn’t so innocent. So, it will be interesting to find out about Allie’s sins. Will Allie’s mother fill in some holes in Allie’s story? We will have to keep watching the CBS soap to find out!