Days Of Our Lives Spoilers: The Bigger They Are, The Harder They Fall: Alex Falls Hard For Stephanie 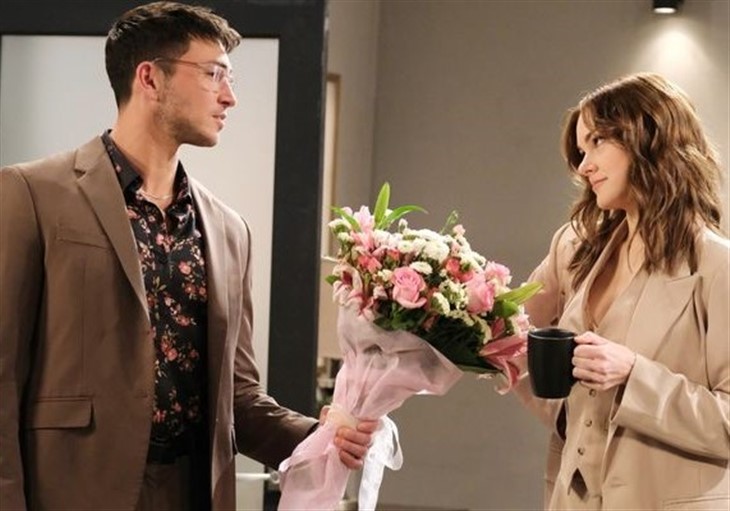 Days of Our Lives spoilers and updates tease in this week’s Soap Opera Digest that Alex Kiriakis (Robert Scott Wilson) will literally fall hard for Stephanie Johnson (Abigail Klein). The first time he sees her, outside Sweet Bits Bakery in Horton Town Square he is literally dumbfounded and “knows she’s the one”, an odd statement for a confirmed bachelor.

Days Of Our Lives Spoilers – The Bigger They Are….

The bigger they are, the harder they fall, and when Alex invites her to dinner he falls flat on his face, Stephanie saying an unequivocal no. Alex isn’t used to hearing that word in relation to him asking for a date, so he knows he’s going to have to step up his game to get Stephanie’s attention. Stephanie’s first impression is that Alex is a player, and most players are in love with themselves and take it out on others; she couldn’t believe he made a love pronouncement.

Stephanie addressed with Alex the fact that he barely met her and doesn’t even know anything about her. How can someone love someone they know nothing about?

Stephanie’s outta there and away from Alex as fast as her legs can carry her, and then gets a call from Sonny Kiriakis (Zach Tinker) mid-flight. She heads over to Titan and then she’s shocked to see Alex again there, Sonny introducing him as his brother. Stephanie can’t believe her eyes or her ears, and quickly turns down Sonny’s offer to do public relations for Titan because Alex is chasing after her. As for Alex, he can’t believe she’s there, and takes it as a sign that the fates want them together. Sonny has to convince that Alex will calm down and move on before she agrees to take the job.

Days Of Our Lives Spoilers – No Kissin’ Cousins For Her

Stephanie finally agrees to take the job, but makes it clear that there’ll be no kissin’ cousins for her where Alex is concerned, after Alex assures her they’re not related. Still, even if he’s Sonny’s half-brother and there’s no blood relation between them, there’s still an ick factor about the thought of dating Alex for Stephanie. When Stephanie agrees to come on board, finally, Alex determines to create opportunities for them to get to know each other better, not being one to sit back and wait.

One thing that Alex does to up his game with Stephanie is to bring her a bouquet of flowers, but finds that she’s one hard nut to crack. However, Alex is nothing if not persistent, and he’ll keep trying until she softens up.