The Bold And The Beautiful Spoilers: Brooke And Steffy Insert Themselves Into Thomas And Hope’s Decision 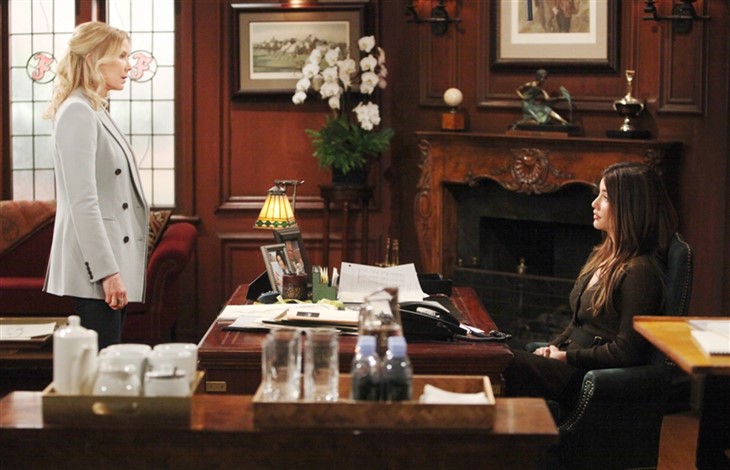 Viewers know that the potential for a custody battle increases the more that Thomas Forrester’s (Matthew Atkinson) biological son and Hope Spencer’s (Annika Noelle) adopted son come into focus. Forrester and Logan family members will naturally respond to this conflict.

But Brooke and Steffy do not want to be sideline players. They want their takes to rule Hope and Thomas respectively.

The Bold And The Beautiful Spoilers: Hope Allows One Night – Brooke Believes She Is In Control

The Bold And The Beautiful Spoilers – Brooke Logan Forrester Is Projecting

Brooke is not able to control the latest reconciliation with Ridge. She is incensed that Taylor Hayes (Krista Allen) managed to ingratiate herself into Ridge’s heart after he recently decided to return to the Logan mansion.

But Brooke and Ridge’s reconciliation has not been finalized. Brooke believes that Ridge is wavering, with her recent misdeeds lingering in his mind.

Lang’s character also knows that the Monaco event, where Steffy and John Finn Finnegan (Tanner Novlan) reunited, has swayed Ridge. So, Brooke is using the Douglas matter as a proxy to strike at Taylor.

Steffy believed she lost her beloved husband due to his birth mother’s deranged actions. Sheila Carter (Kimberlin Brown) was believed to have killed Finn and also thought she killed Steffy. But neither gunshot ended their lives.

Reclaiming her marriage and beautiful life with Finn altered Steffy’s reality. As much as she appreciated the cliff house world they created, Steffy now has an infinitely deepened sense of family and its meaning.

Along with the above, Steffy senses that the Logans are primed for a takedown. She wants her father to remarry her mother, Taylor.

Hope is the woman who took Liam Spencer (Scott Clifton) from Steffy on more than one occasion. So, Woods’ character is fired up about Hope now wanting to block Thomas from reclaiming his status as a full-time father.

Working together, Thomas and Hope could reach an amicable agreement. Ideally, Douglas might live with Thomas and see how that goes for a while.

But it is reasonable for Hope to be concerned about Douglas’ sudden move from the cabin. Neither she nor Thomas knows how that will affect him in the near future.

Plus, Thomas owes Hope full respect and consideration for all she has done for Douglas. Hope and Liam have been raising Douglas as their own for various years in soap time. His bond with them and Beth Spencer (Madeline Valdez and River Davidson) should not be discounted, with any permanent move to the Forrester mansion including regularly scheduled time back at the cabin.