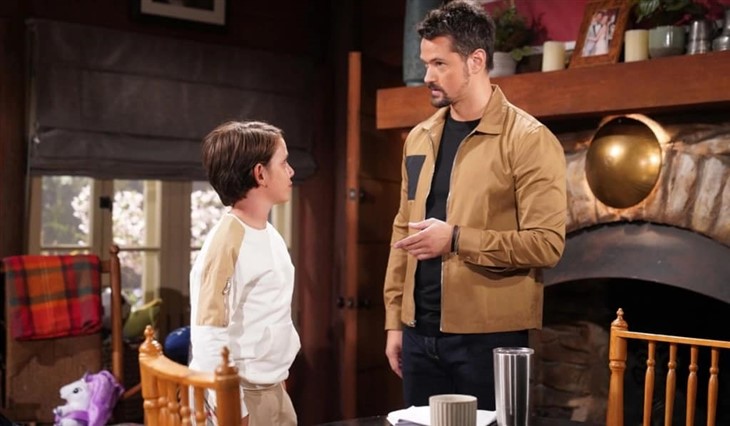 The Bold and the Beautiful spoilers document that Thomas Forrester (Matthew Atkinson) has a renewed interest in being a full-time father to his son. The recast to Django Ferri (Douglas Forrester) was recently highlighted on-screen as Thomas’ bonding time increased.

Hope Spencer (Annika Noelle) is fine with Thomas and Douglas having regularly scheduled visits at the cabin, on the grounds, or off. But she does not want Douglas to move from the cabin.

Thomas’ request for Hope to become Douglas’ replacement mother, following Caroline Spencer’s (Linsey Godfrey) untimely death, was smart. It will be intriguing to see if Hope eventually accepts Thomas’ latest parental decision or if Douglas’ parents need to enter the legal area to solve what feels like an unresolvable dispute.

The Bold And The Beautiful Spoilers: Li And Bill Fit – New Couple Irks Others

The Bold And The Beautiful Spoilers – Thomas Forrester Has A Point

Thomas is Douglas’ biological father. That alone should give him decision-making sway. The same would be true if he had died, Caroline lived, and picked someone to become Douglas’ adoptive father, that man and his wife took Douglas into his home, and then Caroline wanted to reclaim full-time parenthood.

Douglas loves his dad and enjoys being with him. No one will know if Douglas can make the transition to living with Thomas in the Forrester mansion unless a trial period begins. Yes, Thomas would be gambling that Douglas would adapt.

Hope knows that Douglas has been thriving because she sees him every day. Hope and Liam Spencer (Scott Clifton) provide Douglas with the traditional two-parent family structure that provably creates better opportunities for children to develop naturally.

One parent can not be two people, no matter how sincere that person’s efforts might be. Also, no matter how many other family members, friends, acquaintances, or whoever assists said parent, none are a complete replacement for another parent.

Douglas has an adoptive mother who respects his birth mother and keeps her memory alive. He also has a stepfather, Liam Spencer (Scott Clifton), who thinks of Douglas as his own.

The Bold And The Beautiful Spoilers – Letting Douglas Forrester Decide?

Hope has an arguably stronger legal argument to make based on human history on the other side of the screen. But this is the soap world.

Thomas has the biological tie, made a wise move in asking his grandfather, Eric Forrester (John McCook), if he could live with him at the mansion, and does not want to cut Hope out.

Neither Hope nor Thomas should fall into the trap of allowing Douglas to decide. Children do not have developed adult minds and must learn from adult authority.

So, Hope and Thomas should not defer their authority by allowing Douglas’ emotions to rule. They need to make adult decisions and then enforce them. If they can not, then the legal system should weigh in. A judge could speak with Douglas as part of that process but should not hold his response as determinative.

A compromise, that neither Hope nor Thomas may like, could prove to be a workable solution that is good for Douglas and fair for his parents.