General Hospital (GH) Spoilers: Nikolas Slept With Esme, Will Ava Pay The Price With Her Life? 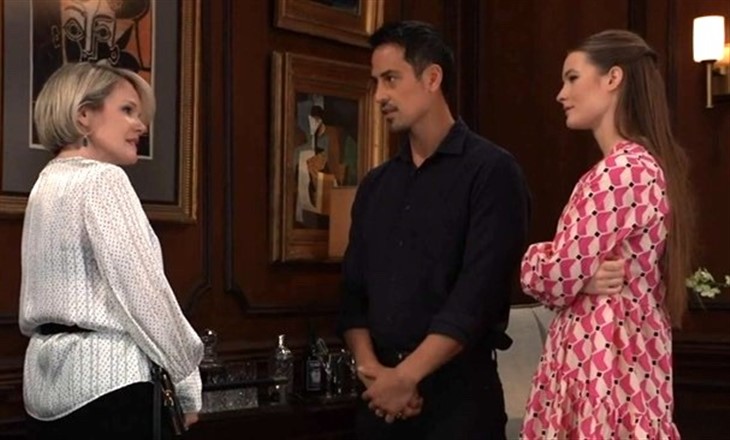 General Hospital (GH) spoilers reveal that the last person Nikolas Cassadine (Marcus Coloma) wanted to know about his sleeping with teen queen Esme Prince (Avery Kristen Pohl) now knows. And what his sinister kin does next is everything!

What was Nikolas thinking, rolling around the castle ground with minxy Esme? The short answer, as well as the right answer, is that he wasn’t thinking, at least not with the organ located between his ears. Now that he’s been exposed as a cheap Romeo, what will son Spencer Cassadine (Nicholas Alexander Chavez) do to get revenge on the dad who also once let him believe he was dead? For that matter, what will Victor Cassadine (Charles Shaughnessy) do to keep the peace? So much karma, so little time.

Ava Jerome (Maura West) was arguing with lovelorn Nikolas when she let it slip that her skunky husband had sex with his son’s former girlfriend when she was still technically his girlfriend. A totally unrepentant Nikolas then tried to throw Ava under the bus for flapping her lips, rather than take responsibility for his betrayal.

Enter patriarch Victor Cassadine who will do anything to keep the fractious family whole. Victor was told that Ava is the problem, rather taking responsibility for his actions. Will Victor take matters into his own hands, to deleterious effect?

Explosive show spoilers indicate that Ava becomes Mason’s (Nathanyael Grey) target after she overheard him talking to Austin Gatlin-Holt (Roger Howarth). But, will it really be Victor who is behind Ava’s mishap?

There is no denying that it is Nikolas who is rending the family apart, but some people believe that blood is thicker than water. If Victor is one of them, could he arrange for Ava to come to harm?

General Hospital spoilers – Ava Jerome Will Be In A Dangerous Situation

Victor is a powerful man and he has shown that he is capable of stooping to incredible lows. Will Ava become his next victim? In other words, is Ava’s life on the line because of Victor Cassadine? Tell us what you think GH fans, have the chickens come home to roost for the Cassadines, with the wrong person paying the price?