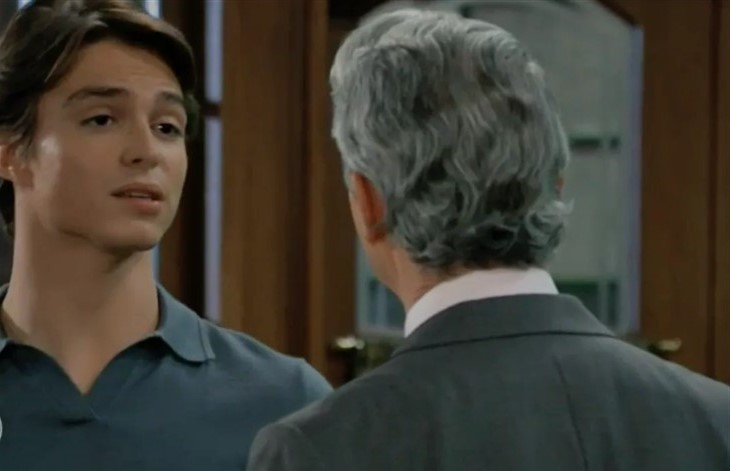 General Hospital spoilers reveal that Victor will approach Spencer and accuse him of stabbing Ava. Spencer had just learned, from Ava that Nikolas slept with his girlfriend. Spencer was furious at his father but he didn’t blame Ava for what happened. Ava didn’t know that Spencer was behind her.

Ava and Spencer have come to somewhat of an understanding because of Trina Robinson (Tabyana Ali). Although Spencer is far from thrilled that his father is with Ava, he wouldn’t try to kill her even if he was drunk. Spencer is not that kind of person. Can Spencer prove his innocence? Will Spencer be charged before he reports to Pentonville?

When last seen, Spencer was with Nikolas who was trying to encourage him to stop drinking. Chances are at Spencer left then to get away from Nikolas. Spencer was already furious with Nikolas. However, Spencer is not a murderer. Spencer will likely insist that he couldn’t kill anyone. After all, Esme did all of the truly evil things that were done while stalking Ava.

Spencer might want to get rid of Ava but he wouldn’t attack her at a picnic with a hook. Spencer is far from being evil enough to stab someone. However, there are other people there who don’t seem to season to get along with. Could Ava have been attacked by someone else? After all, didn’t Ava witness the exchange between Austin Gatlin-Holt (Roger Howarth) and his cousin Mason (Nathanyael Grey)

General Hospital Spoilers – Could Mason Be The Culprit?

Victor may believe that Spencer could have done thing. However, it seems that Mason would be the most likely culprit. Was Mason not following Ava because he thought she had overheard his conversation? Mason seemed to be out for blood. Was Mason the person who attacked Ava? Could Spencer have done it and not remembered?

Spencer may have a time clearing his name, especially since he is getting ready to report to prison. However, Sonny Corinthos (Maurice Benard) will likely be determined to find the attacker. Sonny isn’t about to let his baby mama’s attacker go free. Will Sonny prove Victor’s suspicions wrong? Will Sonny and Victor clash over Spencer?

Be sure to catch up on everything happening with GH right now. Come back here often for  General Hospital spoilers, news, and updates.