The Bold And The Beautiful Spoilers: Painted Catfight Time For Brooke And Taylor? 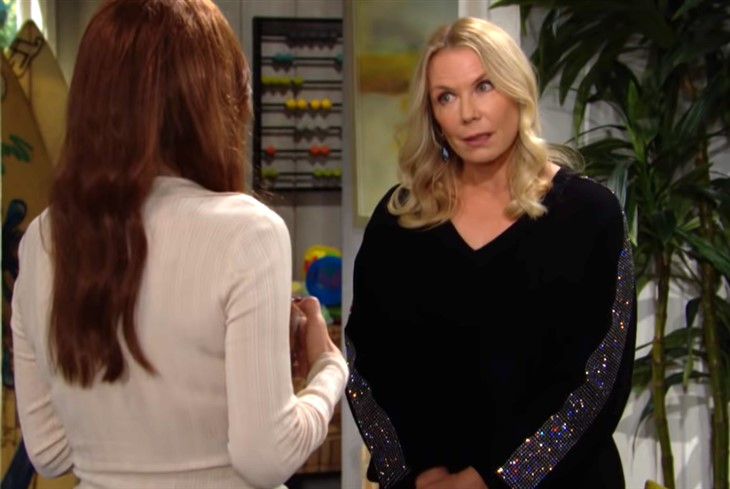 The Bold and the Beautiful spoilers reveal Taylor and Brooke losing their tempers in the worst way, but also a way they should be used to by now.

The Bold And The Beautiful Spoilers – Grow Up Already?

Two grown grandmas can’t get over one aging dress-making playboy and they’re still fighting for him like it’s 1999 because the more things change the more they stay the same — especially on B&B.

Why Ridge Forrester (Thorsten Kaye) is someone to spend most of your adult life humiliating yourself over is beyond us, but it’s what they do and they are so good at it, they are going to do it again.

Brooke Logan Forrester (Katherine Kelly Lang) is furious for so many reasons and it seems the least of it is the fact that Ridge kissed Taylor Hayes (Krista Allen) while they were in Monte Carlo after seeing a photo of Brooke with Hope Logan Spencer (Annika Noelle) and Deacon Sharpe (Sean Kanan). Brooke is also quite upset at the idea of Hope losing a child that is not hers to his own father. That’s just blasphemy and she partly blames Taylor for such a horrific situation for her precious daughter.

B&B Spoilers – Bring On The Paint

The last time Brooke and Taylor got into a catfight when Hunter Tylo was still in the role was at Hope’s wedding to Liam and they got into it by throwing cake at one another. Well, this time, it’s paint and both women end up looking quite colorful.

“I don’t know why two grown women would get involved in a paint fight,” Thorsten Kaye said in the September 2, 2022, issue of Soap Opera Digest. “This has worked over the years and people want to see it. It;s amazing to see how two incredible, intelligent women would throw paint at each other over some slightly overweight designer, but it’s all good.”

We’re happy to see Kaye agreeing with our sentiments, but this might also be something that B&B fans are getting bored with. Either way, it’s going to happen so get ready to see Taylor and Brooke looking quite bright when all is said and done.

Of course, it’s Ridge who has to act as referee between the two women and it’s a wonder he doesn’t just walk away from them both. Oh, who are we kidding? He’s reveled in all this for decades and it’s not about to stop now, so hopefully, it’s fun to watch. Stay tuned to The Bold and the Beautiful weekdays to find out.