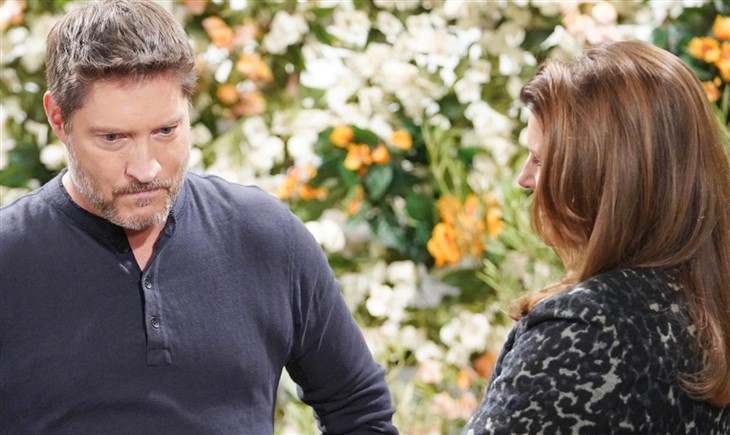 The Bold and the Beautiful spoilers document that Deacon Sharpe (Sean Kanan) believes he is stuck. That is why he will not turn Sheila Carter (Kimberlin Brown) into the authorities. But there is a deeper answer that must be explored as well.

Deacon was the classic bad boy on B&B during his past runs on this soap. This time, he intended to turn his life around.

His goal was simple. Prove to his daughter, Hope Spencer (Annika Noelle), that he was worthy of the trust they established when corresponding while he was in jail. But what drama is there in that on B&B?

The Bold And The Beautiful Spoilers: Brooke And Liam Close Ranks, Thomas Under Fire

The Bold And The Beautiful Spoilers – Letters That Were Godsends

Deacon was imprisoned because he tried to kill Quinn Fuller (Rena Sofer). Sofer’s character thought she killed him a while before Kanan’s character was written back to B&B.

His intent resulted through his unbalanced obsession with revenge. Going to jail was something Deacon used as a wake-up call. He wanted a better life for himself and used his period of incarceration for introspective growth.

The letter reveal proved to be a touching moment on B&B. Deacon pulled the many letters Hope wrote to him. He missed the bulk of her life, with Hope filling him in. She did not tell her loved ones about the correspondence, which served to strengthen their bond.

Shortly after their first meeting at Il Giordino’s bar, Deacon jokingly referred to Sheila as someone who gave him the shivers. He meant it but did not have his perceived fate tied to her as he does now.

Sheila spotted a mark of sorts. She knew Deacon was vulnerable and isolated after being paroled. She also believed that their common ex-con lives and places as outsiders in this version of Los Angeles, California.

Deacon felt sorry for Sheila and still does to a degree. But she is more than scary now. Brown’s character is using Deacon as cover while she plays dead and plots her next move.

Of course, the real reason why Deacon will not turn Sheila in is because TPTB hit on gold. Pairing this soap’s all-time villain with the truly unique character Kanan plays was genius. Thir pairing is too good to give up.

Light-hearted soap fans enjoy the escapist entertainment that this genre offers. They know Sheila would never be allowed out of jail in the real world. Yet, she is not serving time for all her crimes and has survived scenarios where others would have met their ends long ago.

Deacon is the doomed soul in this storyline. His angle is closest to the viewers, in that he knows more about Sheila than the other characters.

Deacon’s fate is tied to Sheila’s because she needs a likable, engaging sidekick, albeit a forced one on B&B.