Days Of Our Lives Spoilers: Is Leo Being Set Up By Orpheus? 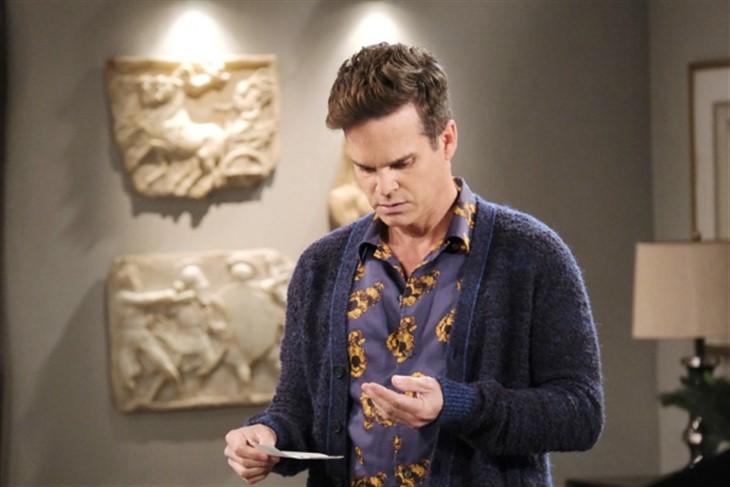 Days of Our Lives spoilers indicate that the Salem PD is still trying to solve Abby Dimera’s (Marci Miller) murder. Now Sonny Kiriakis (Zach Tinker) has been stabbed as well and Leo Stark (Greg Rikaart) is getting the blame. Fans know that Leo is innocent and someone is setting him up. Who is framing Leo and why?

Days Of Our Lives spoilers reveal that Gwen admitted to leaving Statesville, with Ava Vitali’s (Tamara Braun) help. Gwen dawned the Sarah Horton (Linsey Godfrey) mask. However, Abby would never have the conversation Gwen says happened. Abby wanted her sister to pay and she would not allow her to return to prison without calling the cops.

Gwen was already working with Leo and told him exactly what she wanted down to her sister. Then Abby is killed in that exact manner. Is this a coincidence? That is very unlikely. Rafe Hernandez (Galen Gering) might by Gwen’s story but that doesn’t mean fans do.

DOOL Spoilers – A Deal With The Devil?

Gwen could have made a deal with the devil while in prison. Orpheus (George DelHoyo) made a lot of pals while in prison. A lot of people ended up owing him a load of favors as well. Could Gwen have joined the ranks of Orpheus’ pals?

Gwen called someone after her talk with Leo and before she left the prison. What is Gwen called Orpheus and told him about Leo’s hit list? Gwen could get rid of her sister, and Chad Dimera (Billy Flynn) and frame Leo at the same time. Orpheus could have easily attacked Sonny while Leo was downstairs and framed him. How did Leo’s hit list get into anyone else’s hands? Where could anyone have accessed the list from, could it be a copy of Leo’s list? Does Gwen expect Orpheus to cover for her in the end?

Days Of Our Lives Spoilers – What Does Gwen Owe Orpheus In Return?

Orpheus has attacked Marlena Evans (Deidre Hall), Kayla Johnson (Mary Beth Evans), and Kate Dimera (Lauren Koslow). Orpheus also promised that there was much more to come. Has Orpheus forced Gwen to help him go after these ladies again? Will Gwen get caught up in Orpheus’ plan and go back to prison anyway? Could Orpheus be sitting Gwen up right along with Leo?

Orpheus is far from being stupid. If Gwen is beholden to him, she will certainly pay. How much will this cost Gwen? Will Gwen end up playing with her life?