Days Of Our Lives Spoilers: Sonny And Leo Team Up, Love Blooms As Real Attacker Found? 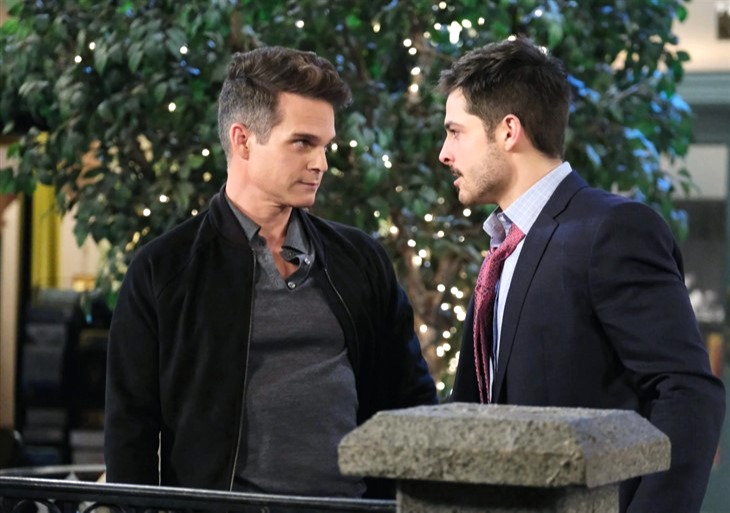 Days of Our Lives spoilers reveal that Leo Stark (Greg Rikaart) will beg Sonny Kiriakis (Zach Tinker) for help. Leo isn’t just accused of stabbing Sonny but of killing Abigail DiMera (formerly played by Marci Miller). Sonny could agree to help Leo but only to find out who really tried to kill him. That means a door is being opened to an unexpected romance between the enemies.

DOOL spoilers reveal that Leo went to see Sonny after telling the police that Gwen Rizczech (Emily O’Brien) confessed to killing Abigail. However, Leo was not expecting to find Sonny lifeless on the ground after being stabbed in the back. Of course, Leo was hovering over Sonny’s body when someone walked in.

As fans saw during a recent episode, that person was none other than Chad DiMera (Billy Flynn). Of course, Chad rushed over to Sonny and put pressure on the wound. Meanwhile, Leo called 911. Chad questioned if Leo really did call an ambulance or not. For once, it seems Leo actually tried to do the right thing.

During the week of September 5, Leo will be accused of trying to kill Sonny. However, he will also face another round of accusations that he murdered Abigail. Leo will insist that he is innocent. While Leo can claim innocence all day long, there is evidence of both crimes that make him look guilty.

It is teased that Leo will dress up as a nurse to get into Sonny’s hospital room. At first, Sonny panics because he thinks that Leo is there to finish the job. However, Leo is actually there to tell Sonny that he’s innocent.

Days Of Our Lives Spoilers – Teaming Up to Find Attacker

Days of Our Lives spoilers reveal that Sonny knows Leo has done a lot of bad things. However, Sonny also realizes that Leo isn’t a killer. So, Sonny actually believes that Leo is innocent. With that being said, there is still an attempted killer on the loose. It’s possible that Leo and Sonny could team up to help solve the crime.

Days Of Our Lives Spoilers: Orpheus Plays A Dangerous Game: Roman, Steve And John Pitted Against Each Other https://t.co/b3t2ntHRXP #DaysofOurLives #Spoilers #DaysofOurLivesCast pic.twitter.com/36plCcaHe7

Even though Will Horton (Chandler Massey) returns as Sonny recovers, the actor isn’t coming back full-time. Massey has another job that he loves and can only make occasional visits. So, that means Sonny will need a new romance. It’s hard to keep a couple together if they aren’t even living in the same state.

So, could Leo and Sonny actually develop feelings for each other while investigating the crime? Share your thoughts and remember to keep watching the NBC soap to see what happens next.