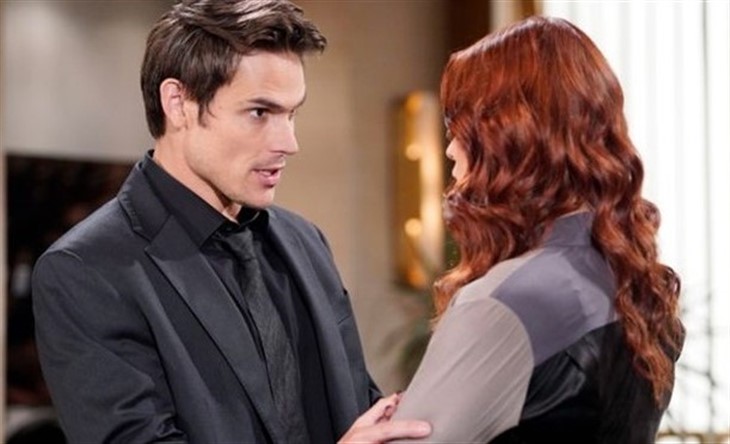 The Young and the Restless spoilers document that Adam Newman’s (Mark Grossman) sit-down with Sally Spectra (Courtney Hope) may be a foreshadowing. This brief couple exploded far too quickly and seems likely to rebound toward renewal and possibly, marriage.

Sally has her top spot at Newman Media because Adam demurred. He left the family business, not wanting to make life harder for the current woman he loves.

Adam’s weeks of rejecting Sally’s call-out came to an end at Crimson Lights. Their talk included his tell about the new Jabot job and admitting that she was right.

The Young And The Restless Spoilers – Sharon Rosales Plays Facilitator

Sharon Rosales (Sharon Case) has been serving as a go-between. She listened to Sally on more than one occasion, realizing that Hope’s character cares deeply for Adam.

The Young And The Restless Spoilers: Chelsea Is Lonely – Billy Is Reckless

Case’s character loved Adam at one point in her life. He was her husband and arguably most intense romantic connection. But their relationship, as is true of others he had with many, was fleeting and failed hard in the end.

Sally confided in Sharon because she values her experience with Adam. Sharon’s tell to Adam about Sally still caring for him led to an apology.

Adam was bent on destroying his father. His plan was calculated, including the resignation from Newman Media to protect Sally.

But Adam’s recent talk with Chelsea Lawson (Melissa Claire Egan) cleared his head and lightened the mood. He decided not to use the illegally obtained Genoa City Police Department report about Ashland Locke’s (Robert Newman) death as a weapon against Victor Newman (Eric Braeden).

With the change of heart also came a reconsideration and acceptance of Jack Abbott’s (Peter Bergman) standing job offer. So, he is Jabot’s new co-Chief Executive Officer. Jack projects as the type of uplifting mentor Adam needs during this vulnerable period.

The Young And The Restless Spoilers – Sally Spectra Driven By Love

Sally has matured since crossing over from The Bold and the Beautiful. Her social climbing angle is still arguable.

While Jack was an easy target she did not catch, Adam represents a challenge and a far more suitable match. Together, Sally and Adam can be something. So, why remain apart, other than ego?

Adam seems ready to move forward. While hurt, Sally is resilient. As long as Adam proves sincere, she seems inclined to take the plunge, which would be good soap on Y&R.