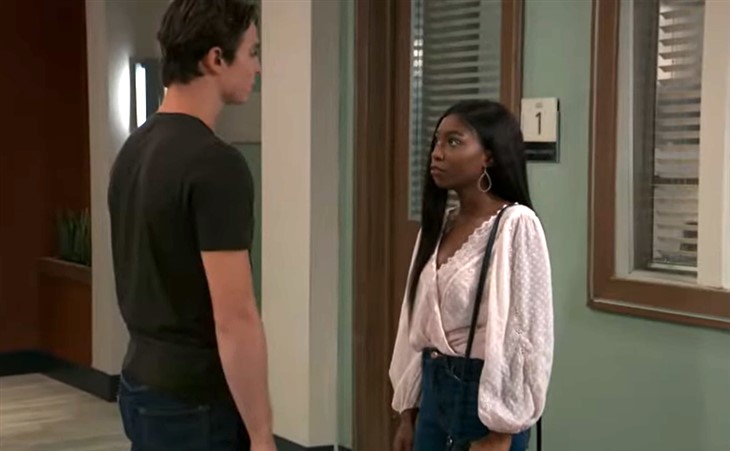 General Hospital spoilers reveal Spencer Cassadine deciding to put in an appearance at Trina Robinson’s big party, but things do not go well at all. Could it have something to do with an angry Spencer having to report to Pentonville the next day?

This would be the second week in a row that Spencer (Nicholas Alexander Chavez) attending a party may not be one of his best moves. At the Q picnic, he learned that his father slept with his girlfriend and he was disgusted at the idea of Nikolas Cassasdine (Marcus Coloma) and Esme Prince (Avery Kristen Pohl) together.

Now, Spencer makes a last-minute decision to go to Trina Robinson’s party at The Savoy and he takes that letter he wrote her, fully intending to give it to her, but things can never go smoothly for Sprina.

When Spencer gets to the party, he sees her sitting closely with Rory Cabrera (Michael Blake Kruse) and it’s just one more clue to Spencer that his own need to play hero and save her is what cost him Trina’s love. If he just would have been truthful with her, she never would have turned to Rory.

Once Spencer spots Rory and Trina together, he thinks about that letter in his pocket and all the truth he finally told, but he just can’t bring himself to give it to her.

“When he gets to the party ready to deliver the letter, she says, ‘I don’t even want to be friends with you,'” Nicholas Alexander Chavez said in the September 11, 2022, issue of Soap Opera Digest. “Then everything gets turned on its head. When Trina takes a massive offensive position against Spencer, it completely blindsides him.”

At that point, Spencer gives up on that letter and sneaks out of the party but not before dropping the letter. As this is a soap opera and we have some young love going on here, Trina finds the letter, but will she read it before Spencer goes to Pentonville? Or will she decide to assert her independence from him once and for all, wondering what is in it, but still not really wanting to know. Stay tuned to General Hospital weekdays to see how this story plays out.