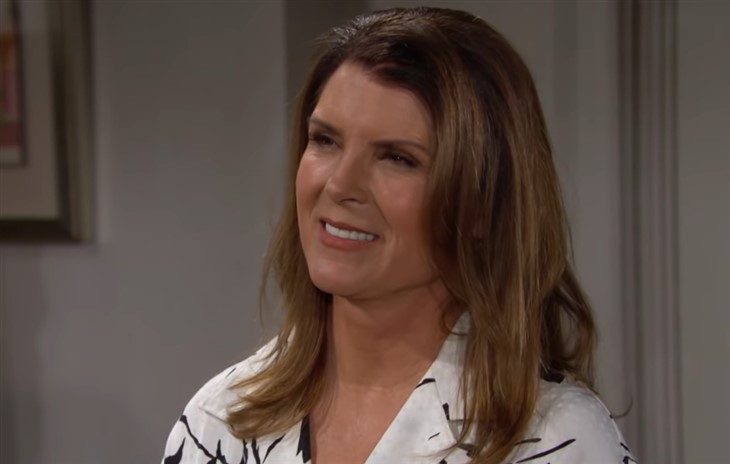 How reckless to not only go out in public, but to head to her son’s home. But Sheila was re-energized after seeing John Finn Finnegan (Tanner Novlan) at Il Giordino.

The endgame likely will result in Deacon’s eventual arrest and likely re-imprisonment. He is not nearly the escape artist that Sheila continues to be. So, his fears for prison appear more likely than seeing Brown’s character where she should be, behind bars.

Deacon seems to have decided that he is trapped. He can only blame himself for not turning Sheila into the police when Deputy Chief Bradley Baker (Dan Martin) and an officer arrived at Deacon’s apartment. That happened after Sheila escaped from jail and was on the loose.

Later, after Sheila was believed to be dead, Deacon could have turned her into his parole officer. Though that individual seemed ill-prepared to handle a situation that would likely have turned violent.

Deacon’s best chance to escape trouble would have been when Martin’s character was at his door. Deacon would have faced understandable scrutiny but stood the best chance of separating himself from this fugitive.

Sheila has not been content since she escaped from prison and narrowly avoided being captured when leaving Li Finnegan’s (Naomi Matsuda) makeshift care facility for Finn. Sheila keeps pushing the boundaries of reality because that is all she knows.

So, living in Deacon’s small apartment is a no-go. Sheila has no intention of becoming his live-in girlfriend. She will not be content to pass the time by indefinitely streaming entertainment or work gratefully, by keeping the small apartment, in order as a form of payment for the safe harbor Deacon is offering.

No, Sheila goes to the cliff house so she can check on Finn. But she also sees Steffy Forrester Finnegan (Jacqueline MacInnes Wood), her despised daughter-in-law.

The Bold and the Beautiful Spoilers: Matthew Atkinson Vows Thomas Has Turned a Corner, Too Good To Be True? #bb #BoldandBeautifulhttps://t.co/UANJKg3f1u

Sheila has convinced herself that Finn retains the capacity to forgive her. Even if that were somehow true, Steffy has zero chance of ever forgiving her surviving mortal enemy.

Something has to give when, not if, Sheila reestablishes contact with Finn and potentially, Hayes, on B&B. Hopefully, that something is not Steffy being blindsided.