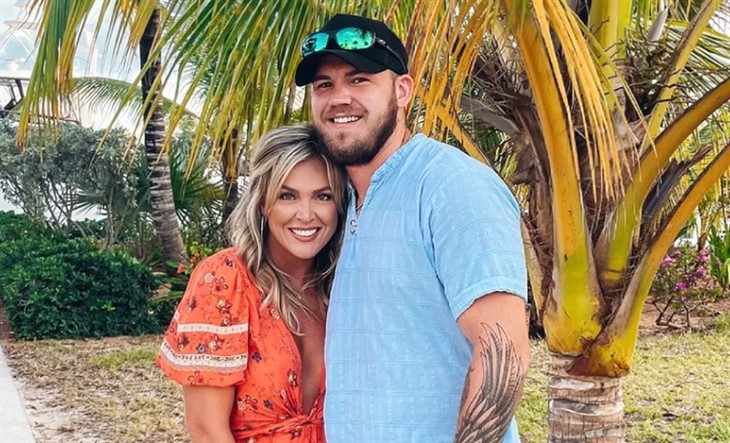 Briefly, some Bachelorette fans thought that Hannah Brown tied the knot with her boyfriend, Adam Woolard. However, it wasn’t her who married recently, but her brother, Patrick Brown. Actually, it might be a bit awkward as the bride, Haley Stevens previously dated Jed Wyatt, who ended up dumped for cheating on her.

Before Hannah won the Dancing with the Stars Mirror Ball Trophy, she featured in several seasons of the Bachelor franchise. The ABC star whittled her way through a number of guys, including Pilot Peter Weber and hot, hunky, Tyler Cameron. Eventually, she chose Jed Wyatt. However, she dumped him after she heard that he cheated on his girlfriend.

Bachelorette fans saw the red flags with Hannah and Jed. However, as the rumors that he cheated on Haley Stevens happened while she was filming, she was unaware of it. But when she found out, she dropped him in a hurry. Later, the news emerged that her brother Patrick started dating Jed’s ex, Haley, and this week they tied the knot.

News Inside Era reported that the wedding details were leaked by videographer Justin Taylor. However, the clip didn’t reveal Hannah brown there with her boyfriend, Adam Woolard. Nevertheless, Hannah Brown didn’t keep fans guessing for too long. On September 5, she took to her Instagram and shared photos of herself and a short video of the reception party.

Bachelorette fans who saw the post by Hannah saw that she wrote, “I’ve come to realize my life is a never-ending plot twist, but it makes for a damn good (for sure weird) story. 🥂🤷‍♀️🥳💕.”

In April this year, Hannah told US Weekly’s podcast, “For The Right Reasons,” that she fully intended to be at her brother’s wedding. Clearly, this is a woman who keeps her promises. After all, Patrick is family.

Bachelorette fans liked the photos and clips and of course, they commented about Hannah’s caption. One of them reassured her saying, “What a great attitude to have about a very weird situation 👏.”

Those fans who missed the fact that Hannah had dated Jed Wyatt and that Patrick was engaged to his ex, couldn’t figure it all out. Well, now you know. So, yes, it is a plot twist that even ABC couldn’t dream up. Sometimes, it seems that life really is weirder than fiction.

Fans like that Hannah seems to have taken a mature stand on the wedding. One of them wrote, “You’re a good woman and I admire your grace and strength.”

What do you think aof this “plot twist” about Hannah’s brother marrying the ex of her ex? Sound off in the comments below.