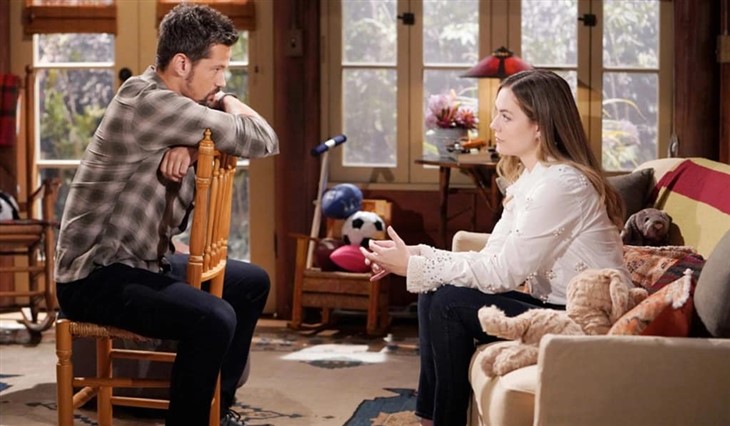 The Bold and the Beautiful spoilers document that Thomas Forrester (Matthew Atkinson) continues to make headway. All is going well with Douglas Forrester (Django Ferri) spending time at the Forrester mansion.

As for Thomas, he has skillfully responded to Hope Spencer’s (Annika Noelle) concerns with deference but has noticeably not bowed to her wishes. That is a change for Thomas, who is not behaving erratically or with an intent to manipulate Hope.

Long-time viewers are familiar with Thomas’ antics. So is Liam Spencer (Scott Clifton), who has defaulted to protect mode.

The Bold And The Beautiful Spoilers – That Was Then In Los Angeles, California

Caroline Spencer’s (Linsey Godfrey) death caused Thomas to bring Douglas home to Los Angeles, California. Atkinson’s alter ego soon targeted Hope, who he did not have a deep connection with before that time in the plot.

Douglas took to Hope. Thomas saw the potential of his son gaining a new mother figure and Hope also became a romantic target.

Liam recently told Brooke Logan Forrester (Katherine Kelly Lang) that he does not trust Thomas and never will. While Hope’s husband and mother share the same feelings about Thomas, they acknowledge that he has stabilized his life.

Like Hope, Liam wants Thomas to be part of Douglas’ life. But Liam sees himself as the better father figure and does not want Thomas to disrupt Hope’s life for their marriage as he has on multiple occasions.

Thomas wants to restore his role as Douglas’ leading parent because he senses the window closing. Thomas believes he must strengthen his bond with Douglas before it frays.

The Bold And The Beautiful Spoilers – Hope Spencer Sees Both Sides

If truth be told, Thomas also does not want Liam to supplant him as the main male figure in his life or be overly influenced by the Spencer and Logan families. Douglas is a Forrester, with Thomas having the backing of his sister, father, mother, and grandfather in seeking to reestablish family ties.

One of Hope’s trademark personality traits is that she is fair. Thomas is playing into her sense of honor, believing that her love for Douglas will allow her to realize he should be with his father.

But Hope knows how much pressure Thomas applied in the recent past. She does not want to risk the good life that she and Liam have provided Douglas. So, her decision is complicated and needs more time to play out on B&B.