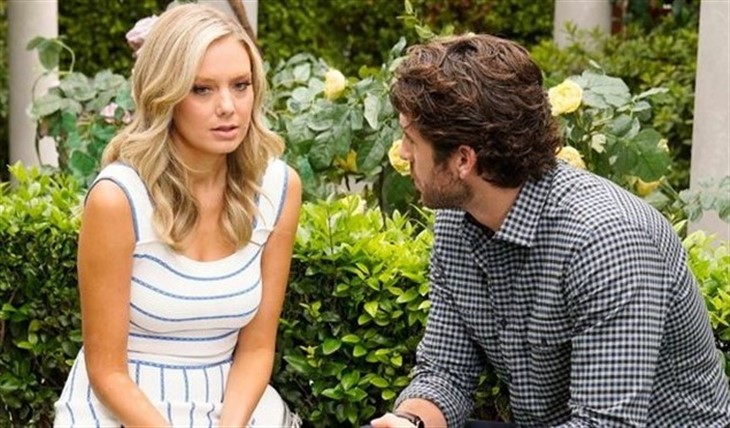 The Young and the Restless spoilers document that Abby Newman Abbott Chancellor (Melissa Ordway) feels closer to her husband than at almost any time since they were first married. She and Chance Chancellor (Conner Floyd) appear to be in balance.

Chance’s struggles, after returning from his disastrous overseas assignment, were followed by his inability to connect with their son Dominic Newman Abbott Winters Chancellor (Rainn and River Ware).

But Abby and the viewers could see that Chance made progress by the time his partner, Rey Rosales (Jordi Vilasuso), died. That put him and Chelsea Lawson (Melissa Claire Egan) into the same soapy sphere, which spells trouble.

The Young And The Restless Spoilers: Nick And Sally See Adam’s Two Faces In Genoa City

Abby naturally trusts her husband. After carrying the weight of the lead-up to Dom’s birth and raising him on her own until Chance returned from his government assigned mission, she needed to prop him up.

Chance realized Abby’s enormous accomplishment only after he returned to the Chancellor mansion and got back on track. His return to the GC Police Department worried Abby.

But Abby is happy that Chance has restored his work-life routine. That should mean this couple has many happy days ahead.

Chance (as then played by Donny Boaz) was shot when he took a bullet for Adam. That rendered him unable to have children at that point in the plot. So, Devon Hamilton (Bryton James) served as a donor.

Abby’s scarring issues does not allow her to conceive. So, Mariah Copeland (Camryn Grimes) became the surrogate.

Chance did not have issues with Devon’s paternal bond but felt inadequate because of not being in GC during the pregnancy period. If Chance is healed, and a daytime miracle happens, allowing Abby to carry a baby again, the character Floyd now plays would likely want his own biological child.

The Young And The Restless Spoilers – Chelsea Lawson Needs Someone

Chelsea’s erratic behavior is concerning. Adam rejected her request that they try to reconcile. Her interest in Billy Abbott (Jason Thompson) was shutdown.

But Billy is unpredictable. So, it remains possible that Billy might romantically connect with Chelsea in the future.

However, daytime fans see the setup. Abby encouraging Chance to bond with Chelsea, combined with the vulnerability of Egan’s character, could lead to her reading between the lines.

Chance only has eyes for Abby. But soaps are about drama, meaning the potential for an unanticipated spark or a misguided mistake can happen on Y&R.

Chance can not currently have a child with Abby. But he could with Chelsea.