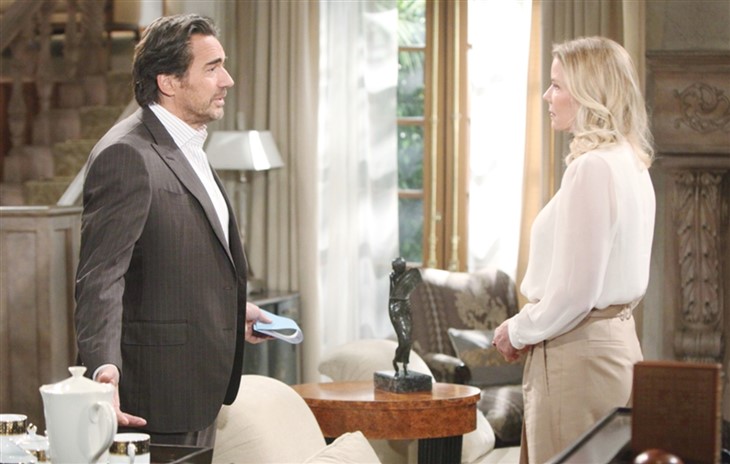 The Bold and the Beautiful spoilers document that Ridge Forrester (Thorsten Kaye) has not left his wife. But he is also spending an increasing amount of time with the woman Brooke Logan Forrester (Katherine Kelly Lang) loathes.

Taylor Hayes (Krista Allen) is someone Brooke chides with regularity. Lang’s character does so because she fears her.

Brooke continues to reinforce her stature in Ridge’s life. Knowingly or not, she is reinforcing the status quo in a relationship that has been defined by consistent inconsistency. But does Ridge want to continue as is or reconcile with the other great love of his life.

The noun destiny can be used to mean inevitable. That is what Brooke thinks. Ridge must agree with her, as he initially married Lang’s character decades ago and then remarried her seven times since.

Being repeatedly married is a subjective soapy pattern. Some could choose to believe that Ridge and Brooke are unable to break from each other because they are each other’s true soul mate.

Alternatively, someone, or Taylor in particular, could assert that Brooke is not a good marriage partner. Ridge has endured many betrayals, with Brooke acknowledging that she has sabotaged their relationship for reasons she can not define.

Ridge has only divorced Taylor once, which came after he initially married her in 1992. That was two years before he first married Brooke.

Taylor (as then played by Hunter Tylo) remarried Ridge in 1998. That was after he had divorced Brooke twice.

Is Taylor the right choice in these modern times, and is her draw more powerful than Brooke’s?

Also, the years cited above reflect real-world time. That reality is understood to be different than soap-time.

It could be that Ridge will never be able to reconcile his feelings for both ladies. As his track record proves, Ridge is willing to commit to them for extended periods.

Ridge has been married and involved with other ladies. But he has only had children with Taylor (three) and Brooke (one). So, that reaffirms who his two greatest loves are.

Daytime is about drama. The fans know it will be believable for Ridge to stay with Brooke. But the greater conflict would come if he chose to reconcile with Taylor after many years apart. Ridge’s complicated choice reflects good soap.