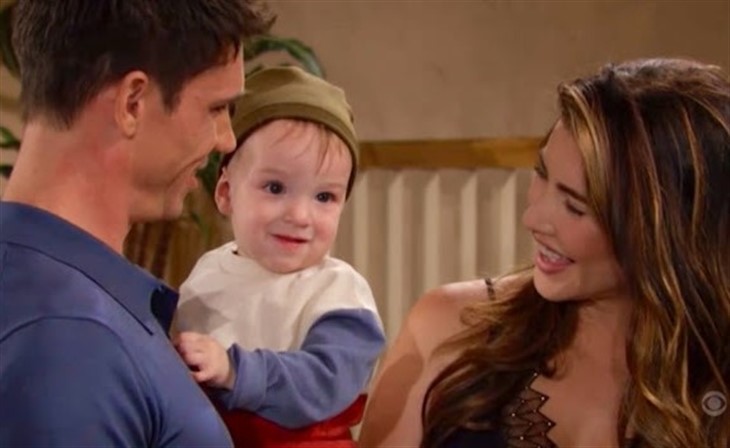 The Bold and the Beautiful spoilers, news, and updates tease that Hayes Finnegan is now being played by Iliana and Vienna Norris. They took over the role of Hayes from Samantha Worden and Piper Harriot.

Liam Spencer (Scott Clifton) will confront Thomas Forrester (Matthew Atkinson) about his agenda. He can no longer stand how the Forresters manipulate Hope Spencer (Annika Noelle). He doesn’t trust Thomas and he thinks he’s planning something sinister.

But, Thomas will maintain that he just wants what’s best for Douglas Forrester (Django Ferri). He wants to become the best father for the little one but Liam won’t buy his act. He believes that Thomas is just trying to get to Hope so he could win her for himself. Liam will snap and warn Thomas to back off Douglas and to give Hope the proper treatment she deserves.

As for Brooke Forrester (Katherine Kelly Lang) and Taylor Hayes (Krista Allen), they will both uphold their stand regarding the custody of Douglas. Brooke wants Douglas to stay at the cabin while Taylor believes that the little one should stay at the Forrester mansion.

The pair will continue to bicker but it’s obvious that their issues go beyond the Douglas’ custody issue. They also have to settle a score and it has something to do with Ridge Forrester (Thorsten Kaye).

The Bold And The Beautiful Spoilers – Ridge Forrester’s Conflicted Feelings

Meanwhile, Ridge continues to have conflicted feelings for Brooke and Taylor. He’s currently married to Brooke but he can still recall the good times he shared with Taylor. It’s still possible for Ridge to be reunited with Taylor. If that happens, Brooke will definitely unleash her wrath. She’s not the kind of woman who’s willing to share his husband with someone else.

Meanwhile, Zende Forrester Dominguez (Delon de Metz) will keep himself busy as he shows off his latest gown design to Ridge and Thomas. He’ll thank Paris Buckingham (Diamond White) for being his muse and for modeling his latest masterpiece.

Sheila Carter (Kimberlin Brown) will do something daring. She’ll put on a disguise and enter the cliff house so she could get closer to Hayes and John “Finn” Finnegan (Tanner Novlan). She’ll be able to visit Hayes (Iliana and Vienna Norris) as she poses as Lina. Will Sheila cross the line and decide to kidnap her granddaughter?