Days Of Our Lives Spoilers: Gabi And Stefan’s Unexpected Meeting 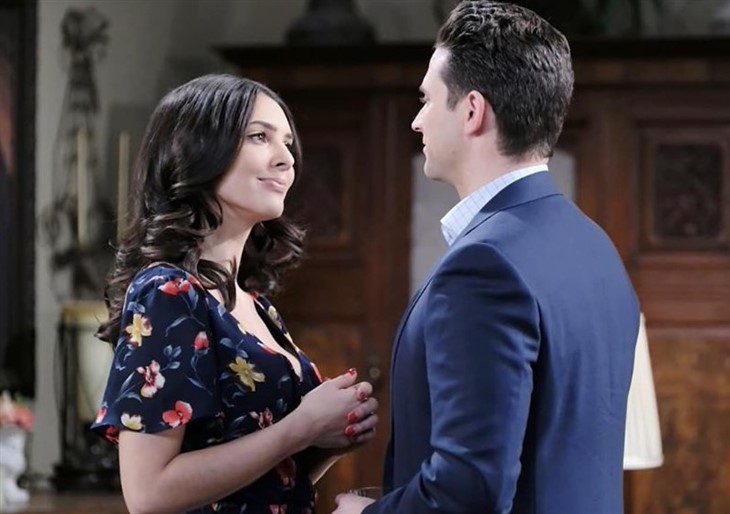 Days of Our Lives spoilers and updates tease in this week’s Soap Opera Digest that Gabi Hernandez (Camila Banus) and Stefan DiMera (Brandon Barash) will have an unexpected meeting. She’ll think he’s Jake DiMera (Brandon Barash) when she runs into him in the DiMera crypt after Jake’s memorial service, since Ava Vitali (Tamara Braun) had previously seen “Jake’.

Days Of Our Lives Spoilers – Did The Programming Fail?

While Ava sees “Jake” again in the DiMera crypt before his memorial service, back at the secret lab of Dr. Wilhelm Rolf (Richard Wharton) Kristen DiMera (Stacy Haiduk) is freaking out. She fears that Rolf’s reprogramming of Stefan’s brain to forget Gabi and remember Chloe Lane (Nadia Bjorlin) was unsuccessful. She didn’t find him looking for Chloe so perhaps he’s gone looking for Gabi again, and Rolf reminded her he had been woken up for like a minute.

Kristen had given Stefan the key to Chloe’s room at the Salem Inn herself and told him exactly where to go. She can’t understand if Rolf’s reprogramming of his great love for Chloe worked, why he isn’t there and all she found was Chloe and Brady Black (Eric Martsolf).

Days Of Our Lives Spoilers: Sloan And Rafe Hit The Sheets, Newlywed Rafe Cheats On Nicole?

Kristen was correct in assuming Stefan was at the mansion but not looking for Gabi or anyone else at the mansion itself this time. He was at the crypt, looking at his ancestors’ plaques and ran into a confused Ava again; after she left he looked at Jake’s plaque and realized he’d had a twin. By the time Johnny DiMera (Carson Boatman) takes Ava back to the crypt, Stefan has left and soon the rest arrive for Jake’s memorial service. Gabi has just accepted a huge engagement ring from Li Shin (Remington Hoffman) in the meantime even though she’s still wearing Stefan’s ring on a chain around her neck.

After the service, Gabi is in the crypt and there’s “Jake” again; now she knows Ava isn’t going crazy like EJ DiMera (Dan Feurreriegel) thinks. Gabi stayed behind remembering Stefan in front of his plaque and she had taken the ring off and placed it by his plaque, then Stefan returned. But now, Stefan knows he had a twin who recently died and Gabi tries to kiss him once she knows he’s Stefan, but he pushes her away.

Days of Our Lives Spoilers: Gabi Finally Has Stefan Back In Her Life Again #Days #DOOL #daysofourliveshttps://t.co/0rnkysVEH6

Rolf’s programming didn’t fail, obviously, or he wouldn’t be pushing her away. Li continues to push Gabi to move forward with their wedding plans as soon as possible, but she’ll still be subconsciously affected by her past with Stefan, no doubt.