The Bold And The Beautiful Spoilers: Finnegans Are Not Secure – Sheila Took The Bus? 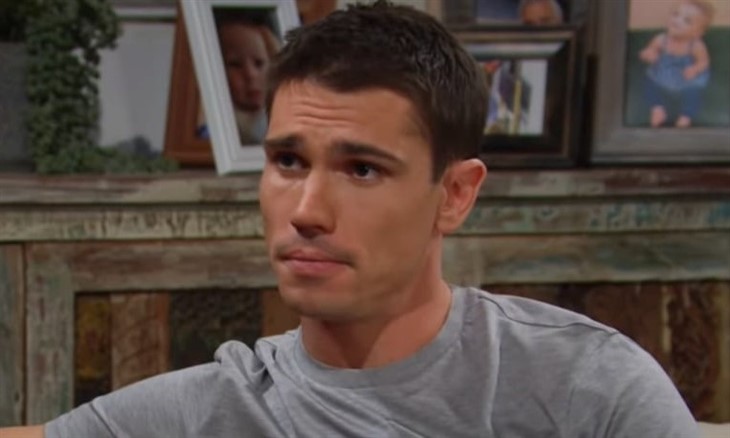 The Bold and the Beautiful spoilers document that John Finn Finnegan (Tanner Novlan) put his son down to take a call. He and Steffy Forrester Finnegan (Jacqueline MacInnes Wood) are used to living a casual lifestyle at the cliff house. That relaxed mentality is why Sheila just walked right in.

Sheila not being in jail for the rest of her life, and walking free when she reappeared in Los Angeles, California, at the Forrester mansion’s guest house, where she revealed herself to Finn as his birth mother, while his wedding reception was taking place, is just as outrageous as the length of this hybrid sentence-paragraph.

After taking a collective breath, we can all admit the suspension of disbelief threshold was crossed and crisscrossed so often that Sheila disguising herself is not preposterous. Hope Spencer (Annika Noelle) not recognizing her in Deacon Sharpe’s (Sean Kanan) darkened, two-room apartment is plausible. But if Finn sees Nicolina and does not realize it is his birth mother than that will be too much.

The Bold And The Beautiful Spoilers – Sheila Carter Took The Bus?

Sheila can not help herself. She has her freedom to lose but does not seem to care.

Viewers must first ask how Sheila, in a long wig, rubber face, and gigantic glasses, transported herself from Il Giardino’s grounds to the cliff house?

She has not known smartphone to access a ride service application. Alternatively, Sheila claims to have a lot of ill-gotten gains. Maybe she called an old-school cab? But Deacon appears to have no landline phone.

So, maybe she walked into clear public view and took the bus?

Li Finnegan (Naomi Matsuda) has good instincts. But she could not sense Sheila lingering by the glass kitchen door? Come on.

Matsuda’s character was positioned where she had a view of the kitchen door. Finn’s back was to that area of the cliff house kitchen area.

Sheila was overwhelmed when she saw the back of her beloved Finn. It was the second time she laid eyes on him within a day or so in soapy time. The sight caused Sheila to misjudge that she was visible.

The viewer’s visual perspectives put them in Brown and Matsuda’s stage marks. So, how did Li not see Sheila in her peripheral vision?

The Bold And The Beautiful Spoilers – The Finnegans Review Digital Recordings?

Steffy Forrester Finnegan (Jacqueline MacInnes Wood) and Finn believe that Sheila is dead. So, they probably are not thinking about tightening security.

But do they already have security cameras installed at the gorgeous family home? Hopefully so.

Some plot space could be used if Finn, Steffy, or even Forrester Creations Head of Security and hi-jinks, Charlie Webber (Dick Christie), needs to review digital footage that includes glimpses of Sheila.