General Hospital Spoilers: Kristina Is Back For A While According To Lexi Ainsworth 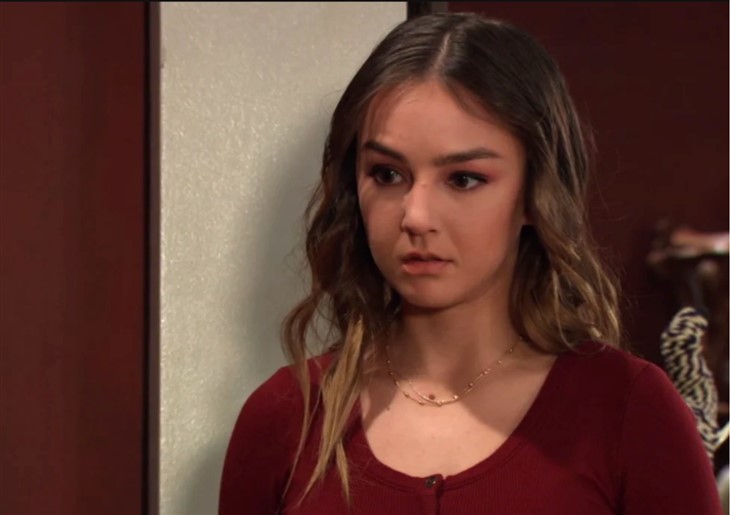 General Hospital spoilers indicate that Lexi Ainsworth only stops by every few months to bring Kristina Corinthos-Davis to Port Charles. However, Lexi is back and says she is sticking around for a while. Does this mean Kristina is finally going to have a storyline? So far Kristina has only been seen a couple of times at Charlie’s.

General Hospital spoilers reveal that according to Soap Opera Digest, Lexi says, “I’m really happy about it. And I’m very excited that it seems like I’m sticking around for a while. I feel like I’m such a tease; I come on for a few days, a few episodes, and then I disappear for a few months! But I never know when they’re going to call me.”

The last engaging story Kristina was in was the “Dawn Of Day” cult story. Since then, Kristina has popped in and out sporadically. However, Kristina has finally been made manager at Charlie’s, a job which she has deserved for years. Will Kristina find a romance while she is back in town?

There have been several actresses that have played Kristina. However, most people identify with Lexi’s version of Kristina. Lexi began playing Kristina in 2009 and has played Kristina mostly ever since. There was a stint in 2011-2012 when Kristina was played by Lindsey Morgan.

Kristina was a bit on the wild side when she was younger. Kristina drove without a license and ran Claudia Corinthos (Sarah Brown) off the road causing her to lose her baby. However, Lexi has had the best father/daughter chemistry with Sonny Corinthos (Maurice Benard). Lexi and Maurice play off each other very well. The closeness of the actors certainly comes through in their work. Kristina is the only child who is accepting of Sonny no matter what he does presently.

General Hospital Spoilers – Will Kristina Corinthos-Davis Stand By Her Father?

Kristina loves her father but she doesn’t agree with his decision to be with Nina Reeves (Cynthia Watros). Kristina tries to accept Sonny as he is but she also realizes her father makes mistakes. Will Kristina continue to stand by Sonny or will she open up about what she thinks he needs?

Will Sonny and Kristina’s relationship as father and daughter continue to grow? Will Kristina continue to be the one child that Sonny can lean on? Sonny was close to Michael Corinthos (Chad Duell) for years. Now Michael has turned against Sonny altogether. Can Kristina help repair their relationship as well?