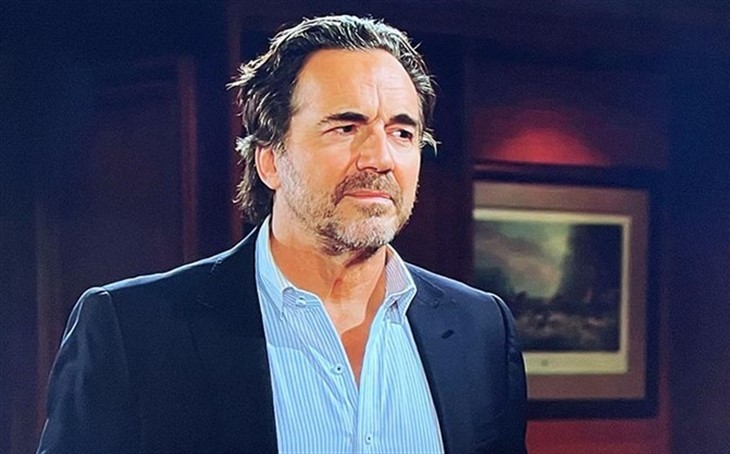 The Bold and the Beautiful spoilers document that Ridge Forrester (Thorsten Kaye) has continued to waver. He is living with Brooke Logan Forrester (Katherine Kelly Lang) at the mansion but has not cleared Taylor Hayes (Krista Allen) from his mind and likely never will. But that does not mean he should leave Brooke for her.

Brooke has convinced Ridge that she has no interest in Deacon Sharpe (Sean Kanan). He is currently occupied with the undead Sheila Carter (Kimberlin Brown) and will soon become involved in a Diane Jenkins (Susan Walters) storyline on The Young and the Restless anyway.

However, Bill Spencer (Don Diamont) retains a soft spot for Brooke. Diamont’s character has a hard spot in his gut for Ridge and vice versa.

The Bold And The Beautiful Spoilers – Bill Spencer Was Helpful

Bill helped John Finn Finnegan (Tanner Novlan) escape from Sheila’s clutches in the recent past. Then Bill used his private jet to immediately fly Finn to Monte Carlo so he could reunite with his then-despondent wife, Steffy Forrester Finnegan (Jacqueline MacInnes Wood).

Ridge was grateful to Bill, thanking him in that exotic setting, where he and Taylor traveled to be with Steffy before knowing Finn was alive. Ridge also pointedly told Bill that he would not forget that he helped his family.

It is possible that Ridge summons his powers of self-restraint when seeing the teased embrace between Brooke and Bill. Then again, maybe not.

Brooke does not shoulder blame at this point in the plot for her unease. She admitted her mistakes with Deacon and banned him from her property. He has mostly adhered to that order.

She continues to stand steadfast by her belief in Ridge and their marriage. Brooke also did not explode when Ridge told her about kissing Taylor in Monte Carlo, which has become a frequently seen retrospective snippet.

Brooke has demonstrated significant patience with Ridge, believing he needs time to sort through his feelings and deal with his myriad of Forrester family issues that had nothing to do with her. But Ridge does not deserve a limitless time frame.

The Bold And The Beautiful Spoilers – Ridge Forrester Demonstrates Growth?

Ridge could cite Brooke’s pattern of self-destruction. She has created problems in their marriages, dating back many years.

However, Ridge knows that he is the man she loves the most. He also appears to consider her his leading soul mate, with Taylor not reaching the same intensity level in his heart.

Kaye’s character does love Taylor. He fully values her role as the mother of three of his children. But she is not his Logan, and with that, Brooke hugging Bill should not be anywhere near a game-over third strike call on B&B.