Days Of Our Lives Spoilers: Everything Goes Wrong For Gabi And Stefan 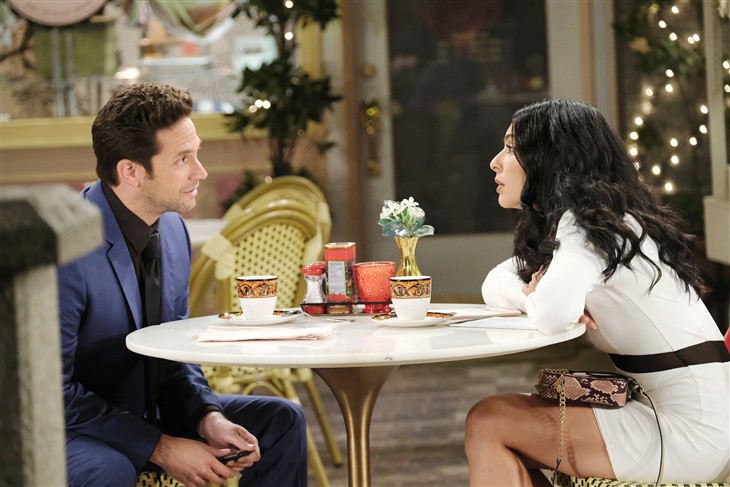 Days of Our Lives spoilers reveal the moment fans have been waiting for as the soap moves to Peacock. When the last NBC show aired, Gabi believed she was seeing a presumed dead Jake DiMera, but things are not at all what they seem.

It takes a bit for Gabi Hernandez (Camila Banus) to realize the man standing before her in the DiMera crypt is not Jake DiMera (Brandon Barash) after all, but rather his twin brother and the love of her life, Stefan O. DiMera (also Brandon Barash). She doesn’t even understand how this can be as Stefan has been gone for so long and his heart was even given to Julie Williams (Susan Seaforth Hayes). No, this has to be a trick

Days Of Our Lives Spoilers: Gabi And Stefan’s Unexpected Meeting

Except that it’s not a trick and Stefan is right there in front of her with Jake’s heart beating inside him. It doesn’t matter to Gabi that she just placed her wedding ring by Stefan’s tomb and agreed to marry Li Shin (Remington Hoffman). She is willing to throw all of that away for a chance to be with Stefan again. Too bad he doesn’t feel the same about her.

Gabi is further stunned when Stefan doesn’t remember loving him at all. Instead, he doesn’t want to have anything to do with her and can’t believe her claims that they were so madly in love and married and planning this grand life together. He only remembers being smitten with Chloe Lane (Nadia Bjorlin) and thanks to Dr. Wilhelm Rolf (Richard Wharton), his feelings for her are now stronger than ever and that’s who he can’t wait to see again.

The Bold and the Beautiful Spoilers: Liam Goes Head To Head With Thomas #bb #boldandbeautifulhttps://t.co/BGDuxWMH87

From the looks of the extended two-minute promo that DOOL put out as soon as its last broadcast episode ended, Gabi does go ahead with her plans to marry Li once she is convinced there is no hope for her and Stefan, but fans should certainly not count Gabi and Stefan, aka ‘Stabi,’ out.

“The road to Stefan and Gabi coming together might be a little rocky and might be a little bumpy,” Head Writer Ron Carlivati said in the September 19, 2022, issue of Soap Opera Digest. “Li pushes forward to marry Gabi and continue with his plans. I would say there’s hope for Gabi, but Li is not going to give up on her so easily. And Chloe will be a factor too.”

Stream Days of Our Lives weekdays on Peacock with a new episode dropping each morning by 6 am.