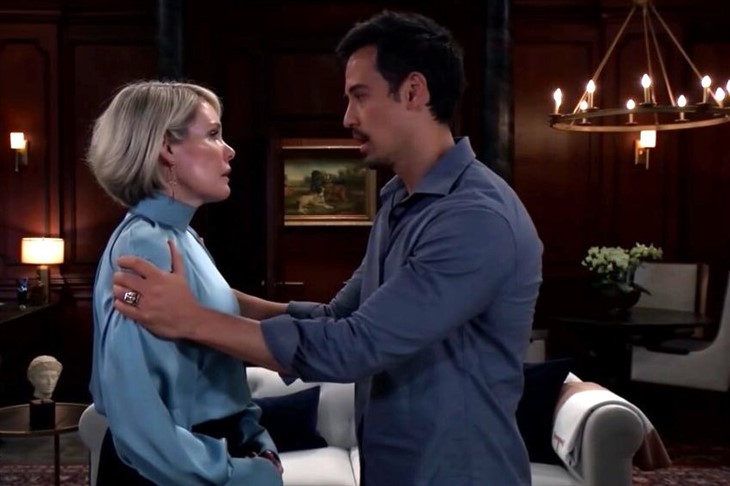 General Hospital (GH) spoilers and updates tease Nikolas Cassadine (Marcus Coloma) is desperate to keep his family from falling apart. Nikolas has been having trouble with his marriage to Ava Jerome-Cassadine (Maura West). Nikolas has become estranged from his son Spencer Cassadine (Nicholas Chavez). Nikolas had turned to his uncle Victor Cassadine (Charles Shaughnessy) for help. Nikolas may find that he gets the help he needs from his aunt Alexis Davis (Nancy Lee Grahn).

Nikolas may tell Alexis that he has been trying to get Ava to forgive him. Nikolas had a one-night stand with Esme Prince (Avery Kristen Pohl). Nikolas had hoped that he could keep the truth from Ava but the truth came to light. Ava confronted Esme about being with Nikolas. Ava and Esme fought near the parapet at Wyndemere. Nikolas arrived in time to see Esme fall from the parapet. Nikolas and Ava believe that Esme is dead.

Nikolas convinced Ava to keep Esme’s fall a secret. Nikolas was upset Ava exposed the truth about his one-night stand with Esme to Spencer at the Quartermaine charity picnic. Nikolas and Ava fought about Spencer. Ava left Nikolas and was attacked by a mystery assailant. Nikolas wants to get his relationship with Ava back on track. Nikolas has wanted to visit Ava but she has barred him from her hospital room. Nikolas may tell Alexis that he had a one-night stand with Esme. Nikolas may not tell Alexis about Esme’s fall. Nikolas may want to get Alexis to help him find a way to get Ava to want to see him.

Nikolas knows that Alexis is aware that he has been struggling to get close to Spencer. Nikolas started to have trouble with his relationship with Spencer when he let him believe that he had been killed by Valentin Cassadine (James Patrick Stuart). Nikolas had expected that Spencer would be happy to have him back in his life.

Spencer has been trying to find a way to get past Nikolas’ betrayal. Spencer was horrified to find out the Nikolas had a one-night stand with Esme because she had been his girlfriend at the time. Spencer has told Nikolas that he does not want him in his life. Spencer has wanted Nikolas to stay away from him because he is facing jail time at Pentonville. Spencer wanted to help to save Trina Robinson (Tabyana Ali).

Esme had framed Trina for a crime that she did not commit. Spencer provided Trina with an alibi in court. Spencer had been with Trina when the crime occurred. Spencer and Trina had kept the secret because Spencer had left the minimal security prison Spring Ridge to visit his mother Courtney Matthew’s (Alicia Leigh Willis) grave. Nikolas wanted to show his support to Spencer before he went to Pentonville but Spencer told him to leave him alone. Nikolas may want Alexis to help him to mend his broken relationship with Spencer.