The Bold And The Beautiful Spoilers: Ridge Uses Bill As Excuse To Run To Taylor 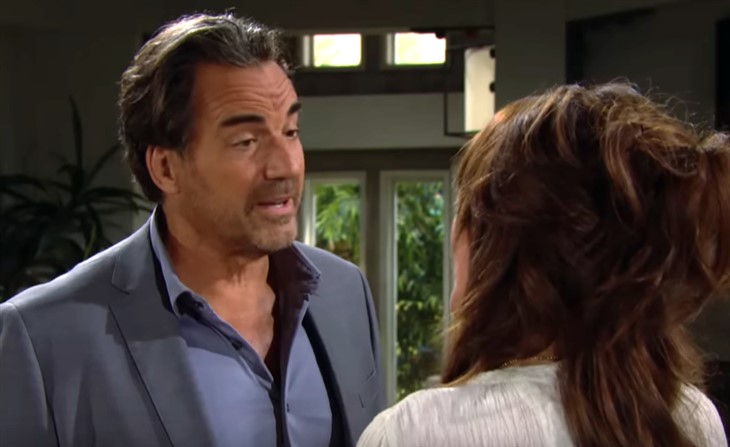 The Bold And The Beautiful spoilers indicate that Ridge Forrester (Thorsten Kaye) may have buried the hatch with Bill Spencer (Don Diamont) for a while, he may use Bill to break up with Brooke Logan (Katherine Kelly Lang). Will Bill’s innocent supportive embrace be Ridge’s excuse to run into Taylor Hayes’ waiting arms?

The Bold and The Beautiful spoilers reveal that Ridge is spending a great deal of time with Taylor at Eric Forrester’s (John McCook) house. Eric has often brought this up asking how Brooke feels about Ridge being there. However, Ridge has even offered to move to Eric’s to watch over Thomas Forrester (Matthew Atkinson) and his son, Douglas Forrester (Django Ferri).

The Bold And The Beautiful Spoilers: Finnegans Are Not Secure – Sheila Took The Bus?

Brooke is not the only person concerned about Douglas being raised by Thomas. Bill’s son, Liam Spencer (Scott Clifton), and Brooke’s daughter, Hope Spencer (Annika Noelle) had been raising Douglas for years. Douglas has lived in the home with his mother because his father couldn’t take care of him. Thomas willingly left his son there for Hope and Liam to raise, and now he wants to take him back.

Suddenly, Thomas wants to uproot Douglas from his home and move him to Eric’s. Bill is concerned that Thomas is trying to come between Liam and Hope by using Douglas. However, Ridge will, of course, misunderstand any conversation between them. Ridge can kiss Taylor but Brooke can’t speak to Bill. However, this is an opening for Ridge and his family with Taylor to use against Brooke.

The Bold And The Beautiful- Brooke Logan Did Nothing Wrong

Brooke is looking out for the best interest of everyone involved. Thomas wanted Hope to adopt his son. Most children live with their mothers as their custodial parents at least half of the time. Why should Douglas’s world be turned upside down by a move? Why is joint custody or leaving Hope as the primary custodian not okay? Why should Thomas get to dictate what happens to Douglas?

Taylor has been behind this from the moment she came back to Los Angeles. However, Hope did not take Douglas, this was Thomas’s idea. Bill is one of the only people Brooke can discuss this with because Ridge refuses to listen to her concerns. However, Ridge is being pulled in Taylor’s direction and this is a terrific excuse to follow it.

Will Ridge walk out on Brooke and his marriage for Taylor? Does Brooke deserve better than what she is getting out of Ridge? Will Bill set Ridge straight in the end?