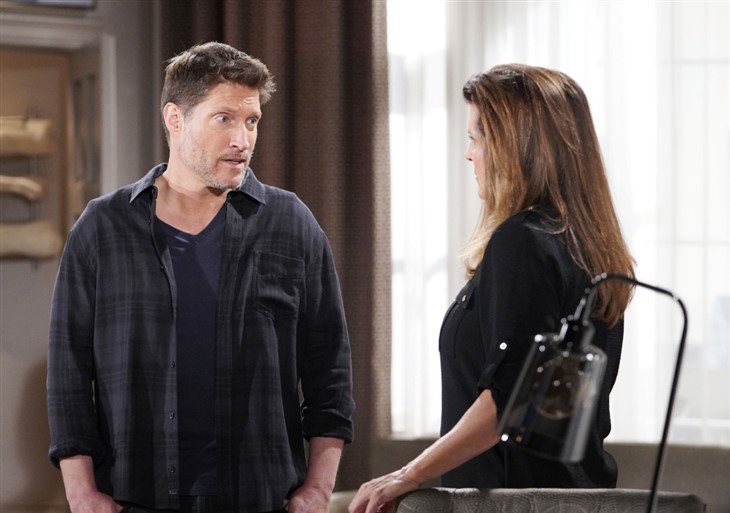 The Bold and the Beautiful spoilers document that Deacon Sharpe (Sean Kanan) appears to have done something that seemed impossible. He more than feels sorry for Sheila Carter (Kimberlin Brown). By God, the man seems to love her!

Sheila has managed to maneuver her way into the heart of the infamous ladies’ man, manipulator, and ex-convict. Deacon’s parolee status has made him value freedom more than at any time in his soapy existence.

Yet, Sheila is the one woman in the world who serves as the greatest threat to Deacon being able to live outside the joint. And she is the woman he has developed feelings for.

Te Bold And The Beautiful Spoilers – Sheila Carter Is Using Him

Sheila likes Deacon, similar to how any user likes those who are useful. Her means to an end with Deacon involves him serving as her sounding board since last year and having an apartment where she can hide from all who bought her bear story.

Deacon was impassioned, repeatedly telling Sheila that she has to realize that John Finn Finnegan (Tanner Novlan) believes she is dead. Deacon also pushed a potential plot point. If Finn realized that Sheila was alive, he would not be inclined to embrace her. Instead, he would call the cops.

B&B Spoilers – Hope Spencer Saw Nicolina, But Did Not Recognize Her

Thankfully, Deacon returned to his apartment when he did. If not, Sheila might have used the scissors she clutched in her hand.

Hope went to her father’s apartment to check on him. When arriving, she found a woman calling herself Nicolina. The red-haired, spectacled creature spoke with what seemed like a southern accent.

Deacon’s arrival allowed him to intervene. He never saw the scissors, instead believing Sheila’s lie that she would never harm his daughter.

Fans of Kanan hope the character he has long played does not meet his fate through Sheila’s demented hands. He is in greater danger than anyone else.

Deacon knows that Sheila is alive. She has repeatedly proven that her survival matters most of all, as recently evidenced by forcing Li Finnegan (Naomi Matsuda) off the bridge. Before that, Sheila inadvertently shot Finn, intentionally shot Steffy Forrester Finnegan (Jacqueline MacInnes Wood), and left them for dead.

Sheila has warned Deacon not to turn her into the authorities. She convinced him that he would lose his freedom in that instance. But it seems just as likely, if not more so, that Deacon could lose his life if Sheila believes he becomes a threat or is no longer useful.