The Bold And The Beautiful Spoilers: Taylor Biding Her Time – Brooke’s Mistake Happens 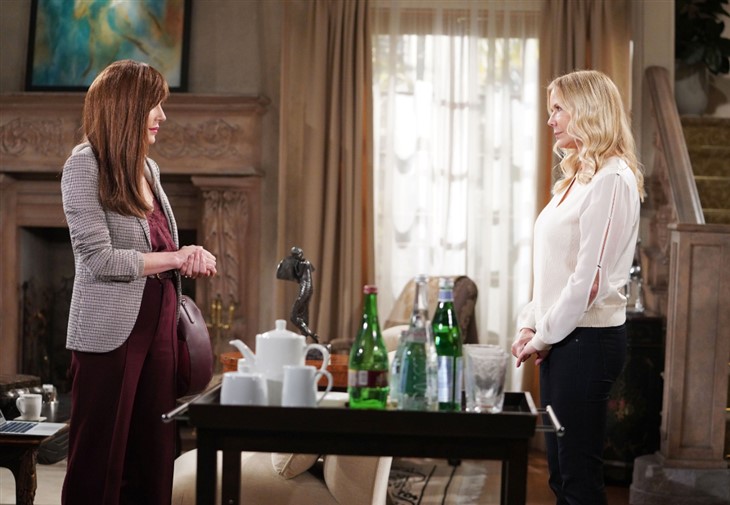 The Bold and the Beautiful spoilers document that Taylor Hayes (Krista Allen) is more optimistic than at any time since she returned from her missionary trip to Africa. She believes that Ridge Forrester (Thorsten Kaye) will leave Brooke Forrester Logan (Katherine Kelly Lang) and reconcile with her.

Ridge’s actions in Monte Carlo and words that followed in Los Angeles, California, elevated Taylor’s belief that their family will be reunited. This soapy scenario is somewhat ambiguous, as Brooke’s latest mistake happens with one of Ridge’s greatest enemies.

Brooke is uneasy. She has a right to be because it is not normal for one’s husband to kiss the woman he had three children with and has repeatedly said he deeply cares for.

The Bold And The Beautiful Spoilers – Isn’t Deacon Sharpe A Top Enemy?

Deacon’s regular involvement with Hope put him in Brooke’s proximity on many occasions, culminating in their infamous New Year’s Eve night of drinking. Deacon’s stay-over was not romantic but provoked Ridge to eventually leave the mansion and move onto the cliff house property where Taylor was present.

Ridge has since left the cliff house, following the perceived end of the Sheila Carter (Kimberlin Brown) threat that was followed by her assumed death.

Bill Spencer (Don Diamont) hilariously refers to Ridge as the dressmaker. He also uses other derogatory terms to denigrate the man he sees as unworthy of Brooke’s devotion.

So, the teased hug between Brooke and Bill projects to yet another instance where Ridge will get bent out of shape. The man has trouble controlling his impulses, as the Shauna Fulton (Denise Richards) connection reaffirmed. So, Brooke’s so-called mistake establishes another flashpoint for Ridge to glom onto.

Ridge has recently convinced himself that Brooke is not in love with Deacon. Ridge taking so long to realize that obvious fact speaks to his insecurities.

Taylor does have a realistic chance to get back together with Ridge. But to do so, she must maintain her no-drama lifestyle.

Ridge was disappointed that Taylor and Brooke battled when using Douglas Forrester’s (Django Ferri) paints and materials. Taylor must maintain control. If so, Brooke’s well-known pattern of repeated drama might result in Ridge impulsively deciding to end their marriage on B&B.