The Bold And The Beautiful Spoilers: Liam Fears Greater For Douglas Or Hope? 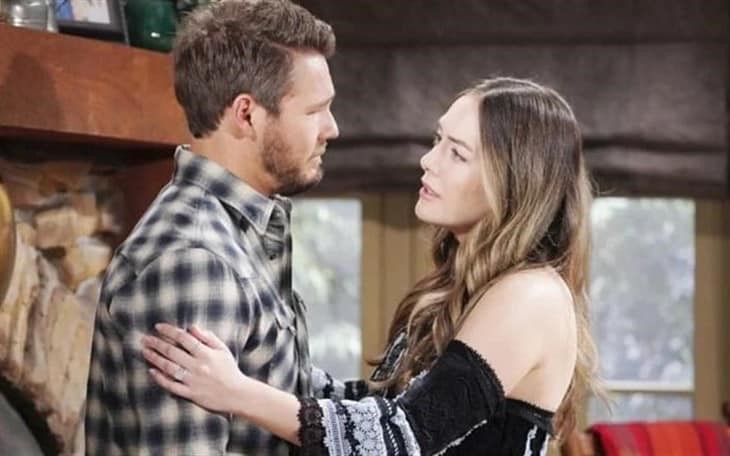 The Bold and the Beautiful spoilers document that Liam Spencer (Scott Clifton) felt compelled to get involved. Liam’s trip to the Forrester mansion did not go smoothly, which he relays to his wife.

Thomas Forrester (Matthew Atkinson) has been a soapy thorn in Liam’s side for years. However, it appeared that Thomas developed respect for Liam, who willingly served as Douglas Forrester’s (Django Ferri) stepfather during the years he has lived at the cabin.

Thomas’ capacity for ingratitude can never be discounted. In Liam’s opinion, Thomas is disrupting Douglas’ life for selfish reasons. Thomas disagrees and does not like Liam using past mental health issues as a hammer.

Brooke Logan Forrester (Katherine Kelly Lang) suffered a broken ankle in the recent past. Lang’s real-life accident on Mother’s Day was incorporated into the script, which resulted in Brooke having extra time to sit on her couch and ruminate about Hope Spencer’s (Annika Noelle) life and Taylor Hayes’ (Krista Allen) threat.

Liam and Brooke are simpatico when it comes to Thomas. Neither character trusts him for justified reasons. He has often upset their loved ones and has only been supposedly stable for a period that can be counted in months.

Hope’s generous spirit has been manipulated by Thomas in the past. Currently, he positioned Douglas at the Forrester mansion and created a carnival-like atmosphere that most children his age would enjoy.

Thomas’ intent was for Hope to see Douglas enjoying himself and Ferri’s character to serve as a witness. Douglas’ exuberant state of mind, appreciation for his father, and tells to Hope were all designed to impact Hope.

Noelle’s character wants to believe that Thomas has regained and can maintain stability. She does not want to deny Douglas time with his father at this stage of his life but also wants to protect him from a potentially unstable atmosphere based on Thomas’ recent past.

Liam has come to care for Douglas as though he were his biological son. He also sees the real threat to Hope.

Hope has bonded with Douglas, becoming far more than a stand-in for the late Caroline Spencer (Linsey Godfrey). Douglas thinks of Hope as his second mother, and she has embraced him as a true son.

Clifton’s character knows Thomas’ penchant for mind games and is attempting to head off an unnecessary conflict. He understands that Thomas must be involved in Douglas’ life. But he will not stand by while Atkinson’s character reverts to his obsessive pattern with Hope, which appears to be restarting on B&B.