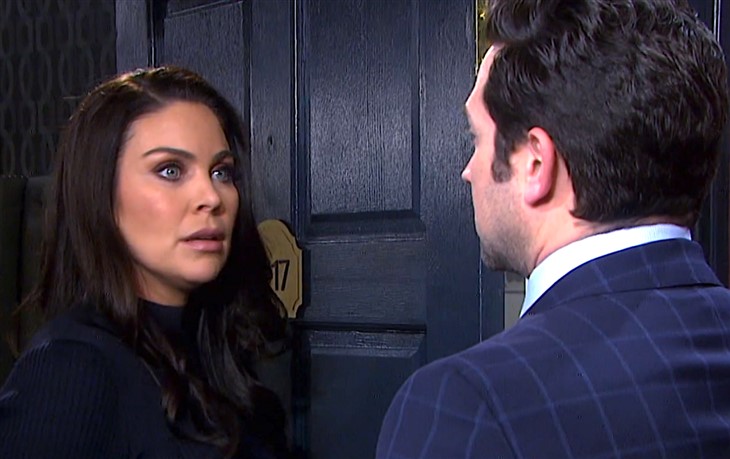 Days of Our Lives spoilers for the week of September 19 reveal that Chloe Lane (Nadia Bjorlin) makes a confession to Brady Black (Eric Martsolf). With Stefan DiMera (Brandon Barash) thinking he is in love with Chloe, could she end up sharing a forbidden kiss? If so, how will Brady react when he learns of the shocking betrayal?

DOOL spoilers reveal that Stefan was brainwashed by Dr. Wilhelm Rolf (Richard Wharton) just as he was ordered. Once Stefan woke up after the brainwashing, Kristen DiMera (Stacy Haiduk) expected to see him with Chloe.

However, when Kristen burst into the door, Chloe and Brady Black (Eric Martsolf) had their passion interrupted. As Kristen looked around the room, she realized Stefan wasn’t even there. Instead, Stefan was lashing out at Gabi Hernandez (Camila Banus) for ruining his chances with Chloe.

Days Of Our Lives Spoilers: Abby Helps Chad Move On, Will It Be With Stephanie?

While Stefan didn’t go straight to Chloe as he was supposed to, Kristen’s scheme isn’t ruined just yet. Stefan thinks that Chloe is the woman he loves and is determined to reunite with her. It is teased that while Brady and Kristen are in court, Stefan shows up at Chloe’s door with flowers.

Days of Our Lives spoilers for the week of September 19 reveal that Chloe will make a confession to Brady. This could be something as simple as wishing harm on Kristen or not being totally honest about an issue.

However, it could also be something unexpected. With all the stress that Chloe is under, could she kiss Stefan? Or perhaps Stefan suddenly plants a smooch on Chloe. Even if she pulls away, Chloe will feel guilty about keeping this secret from Brady. So, she could decide to come clean with the man she loves.

If Stefan reports to Kristen that he kissed Chloe, the villain will surely use this to cause problems with Brady’s relationship. Even if Kristen can never get Brady and Rachel Black (Finley Rose Slater) back, she is determined to get rid of Chloe. Kristen blames all of her problems over the past few years on Chloe coming back into Brady’s life.

Now, just how far will Kristen go to get her way? Is it possible that Chloe is in grave danger? How will Brady react to learning about Chloe’s kiss with Stefan? What other problems will Kristen and Stefan cause for Brady and Chloe? Share your thoughts and remember to keep watching the soap on Peacock to find out what happens next.