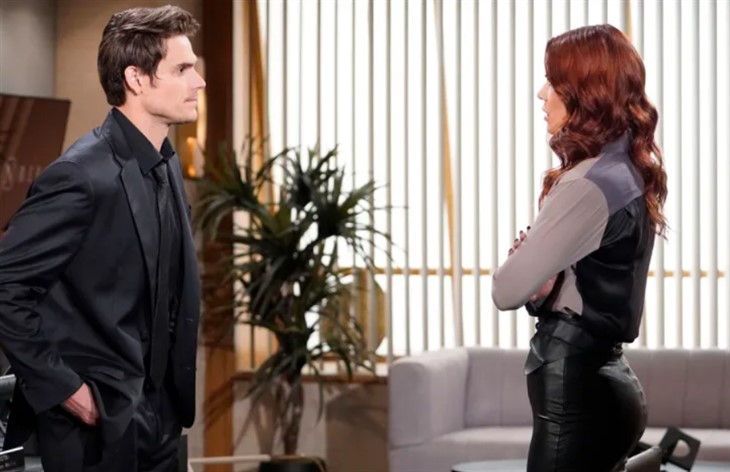 The Young and the Restless spoilers document that Adam Newman (Mark Grossman) spotted Sally Spectra (Courtney Hope) and his brother at Society. He had dinner with them and did not appear to recognize that something unusual happened between the just-formed couple.

Nick Newman (Joshua Morrow) hid a few smiles while enjoying the awkward meal. How ironic for him to have done what he often accursed Adam of doing.

Sally is not currently with Adam. She led him to believe there was a soapy opening back to togetherness. But Hope’s character later made it clear that they were still done.

The Young And The Restless Spoilers – Was Sally Spectra Single?

The subject header is an open question. Sally and Adam were not married or engaged. Also, Adam recently dumped her in what he calls a unilateral decision he now knows was wrong.

So, Sally is not technically single. She is single. She, like any unattached lady, has the option of becoming involved with another human being.

Of course, Adam is not likely to see the logical nature of Sally’s position or accept the emotional turmoil he caused her. So, Adam will likely take out his anger on Nick.

Nick and Adam’s shared history with women in Genoa City, Wisconsin runs deep. Sharon Rosales (Sharon Case) is the arguably most pronounced example, and she was married to both men.

But Chelsea Lawson (Melissa Claire Egan) is someone who was loved by the Newman brothers and loved them. She did and still does love Adam more than Nick.

Sage Newman (Kelly Sullivan) cared deeply for Nick. She was part of the Gabriel Bingham (the name Adam used after his extreme facial makeover) storyline and gave birth to Adam’s son, Christian Newman (Alex Wilson), who Nick is raising as his own.

The Young And The Restless Spoilers – Adam Newman Is Provoked

Adam’s attempt to cut himself out of Newman chaos will be tested when he learns about Sally and Nick. Working at Jabot shields Adam from the day-to-day Newman Enterprises conflict but will not protect him from having his heart broken.

The Young and the Restless Spoilers: Is Sally Making A Mistake With Nick? #yr #youngandrestlesshttps://t.co/3EWc6eFBAQ

It did seem that Adam began to realize that something personal is developing between Sally and Nick when he was hiding in the hallway outside her suite at The Grand Phoenix Hotel.

It seems certain that Adam will take Nick’s connection with Sally as a brotherly betrayal. But Sally told Adam she is not interested in reconciling. So, fans are anticipating another triangular battle on Y&R.