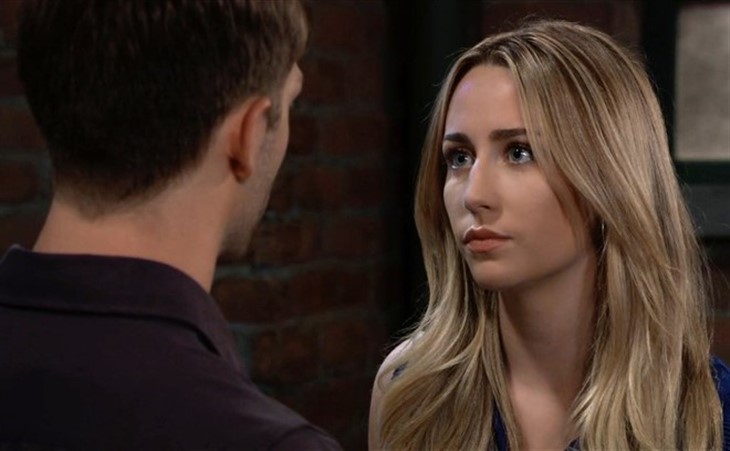 General Hospital spoilers and updates tease that Josslyn Jacks (Eden McCoy) could get jealous over Dex Heller (Evan Hofer) and Kristina Corinthos-Davis’ (Lexi Ainsworth) bond. Even though Josslyn hasn’t even broken up with Cameron Webber (William Lipton) – yet – there could be a new love triangle soon in Port Charles.

There was no doubt there were sparks flying between Joss and Dex when they went dumpster diving for Avery Jerome-Corinthos (Ava and Grace Scarola) charm bracelet. Even though Josslyn seems committed and says she is to Cameron, recently she came down on him over keeping secrets for Spencer Cassadine (Nicholas Chavez). Now it’s her keeping secrets from Cameron, about her and Dex retrieving Avery’s charm bracelet together, saying she did it alone, meaning she’s a little defensive.

Josslyn would be defensive if she were trying to hide her attraction to Dex when she’s with Cameron. Her secret attraction may become difficult to hide if she is obviously jealous seeing Dex with Kristina, who he seems to be forging a friendship with.

A really sweet friendship seemed to be starting between Dex and Kristina, as they sat talking at GH following Brando Corbin’s (Johnny Wactor) attack. Dex seemed to be showing some real compassion to her when she talked about her fearful experience seeing Brando attacked by the hook killer. He gave her some good advice about handling emotions following traumatic incidents. But a sweet friendship could turn into more between the two of them, since Kristina is bi; she could fall into a romance with Dex. She has been involved with both men and women in the past and seemed protective of him when Dante Falconeri (Dominic Zamprogna) was asking too many questions.

General Hospital Spoilers – Not Everyone Would Approve

Not everyone would approve of Dex getting into a relationship with Kristina any more than with Josslyn, although Kristina at least is not with someone else. Since Michael Corinthos (Chad Duell) was raised as Sonny Corinthos’ (Maurice Benard) son, he’d think of Kristina as his sister as well as Josslyn, who is his maternal blood sister. He warned Dex away from Joss and might not like him getting too close to Kristina either.

Then there’s also Sonny’s take – Kristina is his daughter, so that could be a mess, but perhaps not as big a one as Joss getting involved. She seems to be torn between Cameron and Dex, and if Cameron sees she’s jealous over Dex with Kristina, that’ll certainly be a dramatic mess.