The Bold And The Beautiful Spoilers: Bill Rushes In To Mend Brooke’s Broken Heart? 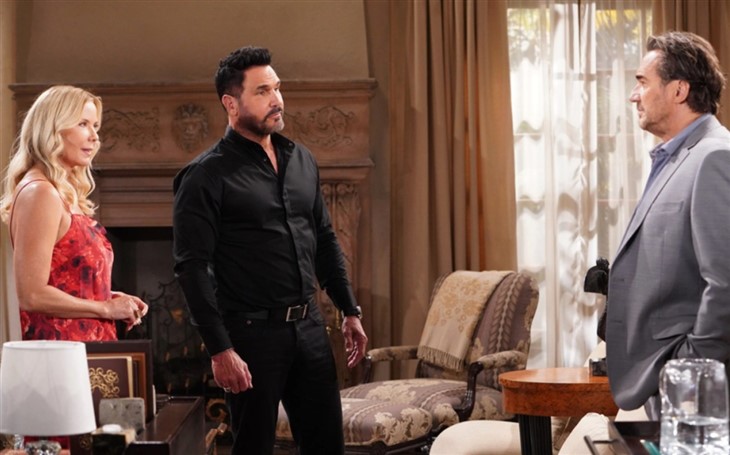 The Bold and The Beautiful spoilers and updates tease that Dollar Bill Spencer (Don Diamont) might get another chance with Brooke Forrester (Katherine Kelly Lang). The ‘Bridge’ seems poised to break again with Ridge Forrester (Thorsten Kaye) torn between Brooke and Taylor Hayes, (Krista Allen) with Taylor seeming to have the advantage over Brooke.

The Bold And The Beautiful Spoilers – Romantic Reminiscing

Viewers will remember that before Ridge barged in on Bill and Brooke in a clinch, they’d been reminiscing about their romance and reliving happy days together. This seemed odd considering Bill had come over to Brooke’s house to cry on her shoulder and ask advice about her sister Katie Logan (Heather Tom). Katie seems to have given Bill the old heave-ho for the last time, and he’s apparently run out of chances with her, having hurt her too many times.

Bill claimed to Brooke he wasn’t there to make a pitch to start something up with her again, but she didn’t seem averse to the idea either. Bill has been a weakness for her in the past, as she has been for him; one of the last major breakups with Ridge was over their moment of weakness.

B & B Spoilers – Comfort And Acceptance

Brooke and Bill both feel comfort and acceptance from each other, and neither has the need to put on airs with each other. They accept each other totally, flaws and all, and that can be a very rare thing. They know each other better than anyone else does and they were very good together. Even when Ridge blustered in on them when Bill was getting ready to leave, he told Ridge Brooke’s a good woman and not to mess it up with her. That’s the second time he’s told him that so maybe Bill is regretting ever losing Brooke and wants another chance deep down.

The Bold And The Beautiful Spoilers – Could ‘Brill’ Make A Comeback?

Even though there seems to be a trend towards Bill having a romance with Li Finnegan (Naomi Matsuda) who he certainly was a hero to, a reunion with Brooke’s possible. He’s been thrown together with Brooke quite a bit as Ridge has been more and more drawn to Taylor, and that seems to hint at a ‘Brill’ comeback. They were a popular super couple when they were together so maybe B & B will give them another shot, if ‘Tridge’ does indeed reunite.

Viewers have to admit that time that Shauna Fulton (Denise Richards) caught a phone video of Bill and Brooke making out in Hope Spencer’s (Annika Noelle) cabin it was hot! The show might be looking for that kind of hot chemistry to spice things up, so putting them back together might be a good idea.