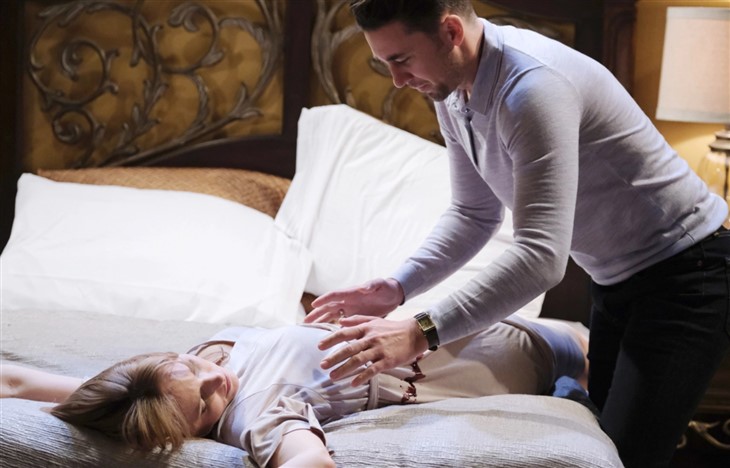 Days of Our Lives spoilers reveal the moment fans have been waiting for all summer long. Chad will finally realize who killed his wife and stabbed his best friend.

Days Of Our Lives Spoilers – One More Red Herring?

For months, Chad DiMera (Billy Flynn) has believed with his whole heart that it was either Leo Stark (Greg Rikaart) or Gwen Rizcech (Emily O’Brien) who killed Abigail DiMera (Marci Miller). However, he could never get his mind off Leo and all evidence kept leading back to him, especially after Sonny Kiriakis (Zach Tinker) was stabbed with the same knife that killed Abigail and Leo was found at the crime scene.

Leo deduced that he had been set up and someone was trying to frame him for both the murder and the attempted murder. The only person he can come up with is Craig Wesley (Kevin Spirtas), whom he confronts. Craig denies everything. Yes, he wanted to get back at Leo for conning him but he is not a cold-blooded killer.

Who killed Abigail? Time to find out!
Watch #DaysofourLives streaming on @peacock! A special $1.99 per month offer (for 12 months) is available now for a limited time. Terms apply. #Days pic.twitter.com/XvuP38ytGp

While Leo is busy grilling Craig, Will Horton (Chandler Massey) and Chad does their best to get Sonny to remember anything from that night that might give them any clues to who stabbed him. That would also give Chad clues as to who stabbed Abigail.

The one thing that comes back to Sonny is the smell of lavender, something that Chad also remembers smelling in his bedroom when he found Abigail bleeding and clinging to life. If they can just find the person who might be wearing lavender or who would purposely leave lavender around.

With that clue to go on, Chad begins a search and investigation in earnest. He feels he finally has a chance to find Abby’s killer and bring whoever it is to justice. He needs to do this for himself, for Abigail, and his children, Thomas and Charlotte.

Eventually, it dawns on Chad who murdered his wife and he is going to fix things and make sure this person remains behind bars forever. However, could it be someone who was already behind bars but now walks free? And what would his motive be? Stay tuned to Days of Our Lives weekdays to find out.