The Bold And The Beautiful Spoilers: Has Brooke Gone Too Far? – Ridge Forgives Almost Anything 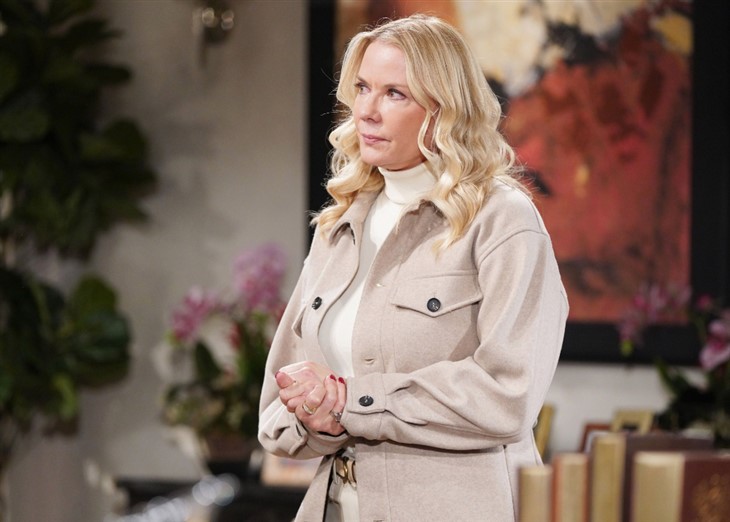 The Bold and the Beautiful spoilers document that Brooke Logan Forrester (Katherine Kelly Lang) seems to always be walking on soapy eggshells. But who can blame her eight-time husband, Ridge Forrester (Thorsten Kaye), for his reactions?

Ridge would be under-reacting if he was not bothered by her kissing Bill Spencer (Don Diamont) in the cabin a few years ago. He reacted as most concerned husbands would when learning that Deacon Sharpe (Sean Kanan) drank with Brooke last New Year’s Eve and then slept in Ridge’s spot in their bed during a platonic protective night.

It can be argued that Ridge has not overreacted based on the many times Brooke inexplicably broke her husband’s trust. She has a history of chaos. But Ridge has practiced intense forgiveness to date.

The Bold And The Beautiful Spoilers: Are Steffy And Thomas Behaving Like Little Kids?

Yes, Brooke is the source of much B&B drama. She is a dynamic, unique, and highly appealing woman. Ridge finds each of those traits very attractive.

But Ridge is in demand as well. His marriages did not begin with Brooke. The character Ronn Moss (Ridge) played for a quarter-century initially married Caroline Spencer (Joanna Johnson). Years later, he married her niece, Caroline Spencer II (Linsey Godfrey).

Neither Caroline is a threat to Ridge as both ladies died relatively young. But Shauna Fulton (Denise Richards) was a threat. She married Ridge on the strip in Las Vegas, Nevada, in what proved to be faux nuptials.

Ridge’s other great love, along with Brooke, is Taylor Hayes (Krista Allen), the mother of three of his children and a two-time wife.

Taylor was a non-factor for years. Her missionary work took her to Africa, where she settled her mind and gained a new perspective.

Steffy Forrester Finnegan (Jacqueline MacInnes Wood) and her brother, Thomas Forrester (Matthew Atkinson), are pumping up their mother’s ego. They are trying to convince her that Ridge will leave Brooke and reconcile.

However, Taylor’s persistence has never been able to break what Brooke has convinced Ridge is destiny.

The welcome mat was out for Ridge for months. He opted to leave the woman he lovingly refers to as his Logan and move into the guest house at the cliff house.

Ridge’s decision came when Steffy and John Finn Finnegan (Tanner Novlan) were dealing with Sheila Carter (Kimberlin Brown) and before the Il Giardino attacks. Taylor’s presence at the Finnegan’s home made the setting more appealing, with viewers led to believe that a reunion was coming.

Ridge becomes intoxicated with Brooke when he is in her presence. But when he is not and has time to logically weigh all converged storyline factors, Ridge could plausibly leave Brooke on B&B, much to Taylor and her children’s delight.