The Young And The Restless Spoilers: Victoria And Billy United? – Chelsea’s Johnny Move Forces Sides To Be Chosen 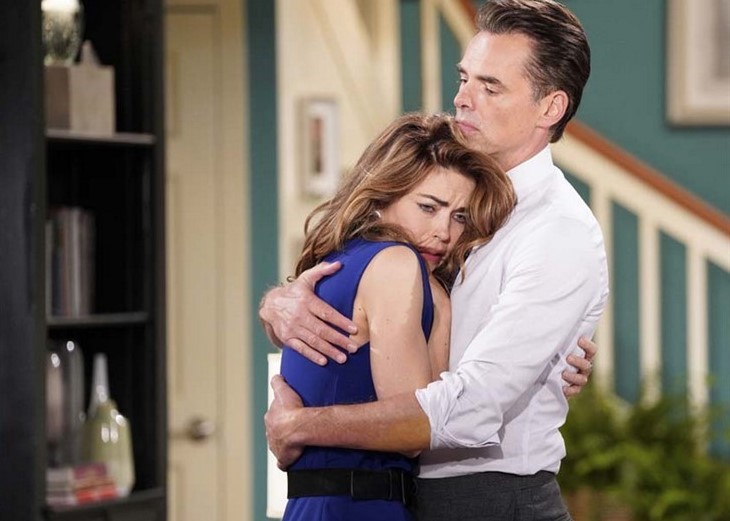 The Young and the Restless spoilers document that Victoria Newman (Amelia Heinle) is the only mother that Billy Abbott’s (Jason Thompson) son, Johnny Abbott (Paxton Mishkind), knows. Chelsea Lawson (Melissa Claire Egan) is trying to fill some holes in her life, believing that Johnny learning about his birth mother will be best for all.

There is no way to tell what happens when Johnny learns the truth. He has been SORAS’d (soap opera rapid aging syndrome) for this storyline, with the audience getting a glimpse of Victoria’s adopted son in a frame positioned behind Nick Newman (Joshua Morrow), when he was sitting in his sister’s executive office.

The Young And The Restless Spoilers: Adam Shaken By Sally – Nick Provokes Next Newman Battle

The Young And The Restless Spoilers – Billy Abbott Unsure About Reveal

Billy expressed his paternal instincts by not endorsing Chelsea’s request made in recent weeks. He did not outright reject her desire to have Johnny learn that Connor Newman (Judah Mackey) was his brother and not his cousin. But Billy has been proceeding with caution.

Chelsea stepped over Billy, not waiting for him to talk with Victoria when seeking her out at Newman Enterprises. Victoria was surprised, reinforcing that Chelsea relinquished her rights to Johnny when allowing Victoria to adopt him.

The horrendous ending to Victoria’s marriage to and business partnership with Ashland Locke (Robert Newman) left her reeling. She needs time to heal and, in typical Newman family mode, has buried her nose in work.

But the acquisition shopping spree Victoria is on has not come without distractions. One could be diabolically positive, with Nate Hastings (Sean Dominic) potentially becoming an information mole so Newman Enterprises can exact a hostile takeover of Chancellor Winters.

Victoria’s personal stability is tied to her returning children. Johnny and Katie Abbott (played by Sienna Mercuri since 2016). Victoria counts on going home at night to her two youngest children and continuing to raise them as she always has.

Victoria expects Billy to back her in this challenge. She raised him since shortly after his birth. So, Billy should be united with Victoria.

Te Young And The Restless Spoilers – Chelsea Lawson For The Win

Chelsea feels she has lost a lot in the last year-plus. Her relationship with Adam Newman (Mark Grossman) went south and included both people lashing out recklessly.

Rey Rosales (Jordi Vilasuso) became a positive force in Chelsea’s life. His forgiveness was cherished, with these characters seemingly likely to pair. But Rey’s death was a heavy blow.

Billy is Johnny’s father and someone she felt reconnected too. But Billy affirmed his commitment to Lily Winters (Christel Khalil) after her kiss.

Chelsea needs a win to regain a sense of stability. She might be forced to seek legal counsel if Victoria and Billy do not agree to some significant change in Johnny’s world on Y&R.