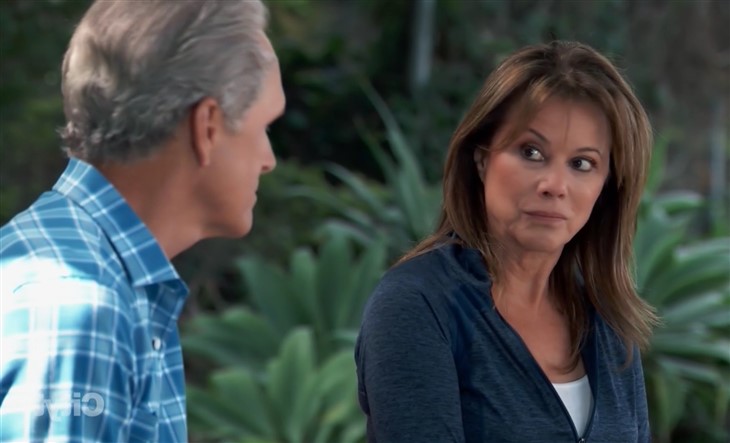 General Hospital spoilers tease that Alexis Davis (Nancy Lee Grahn) and Gregory Chase (Gregory Harrison) have seemingly been spending quite a bit of time together in recent weeks. Usually, they have been bickering over the direction of The Invader since Alexis is the newspaper’s publisher and in charge of its contents. But as the serial killer known as Captain Hook continues to terrorize Port Charles, look for this duo to come together, perhaps even in a romantic way.

The Captain Hook story is quite personal for Alexis already. Her daughter, Kristina Davis-Corinthos (Lexi Ainsworth) witnessed the killer as they attacked Brando Corbin (Johnny Wactor). Although Kristina didn’t really see much because of the darkness, that doesn’t mean she isn’t in danger if the killer believes she can give authorities enough of a clue to help apprehend the madman before he or she strikes again. Alexis will certainly want to use the power of the press to help catch whoever has attacked two Port Charles residents so far.

Although he thought she already knew, Hamilton Finn (Michael Easton) once again crosses a line when he revealed that both Ava Jerome (Maura West) and Brando were attacked with the same weapon: a large fishing hook! Finn overheard Police Commissioner Jordan Ashford (Tanisha Harper) and Sonny Corinthos (Maurice Bernard) discussing the weapon which led him to spill that little fact to Alexis and Gregory. This was careful on Finn’s part because of Alexis’ job.

General Hospital Spoilers – Will Alexis Davis Publish Too Much Information To The Public?

Now armed with the knowledge that there might be a serial killer on the loose in Port Charles, Alexis will have to decide whether or not she should make The Hook public knowledge by way of her newspaper. On the one hand, it is certainly a matter of public safety but having that information out to the public could also hinder the ongoing police investigation. Whatever Alexis decides, you can bet her involvement in this story isn’t over. Spoilers reveal that in the near future Alexis and Gregory will soon make a gruesome discovery. This will likely lead to Alexis and Gregory beginning an investigation of their own. Will they figure out who the killer is before the authorities?

Will Alexis print the information given to her by Finn? Should she? And will Alexis and Gregory discover the next victim? Anything can happen in Port Charles so stay tuned to General Hospital airing weekdays on ABC. And don’t forget to check back right here regularly for all your General Hospital news, information, and spoilers!